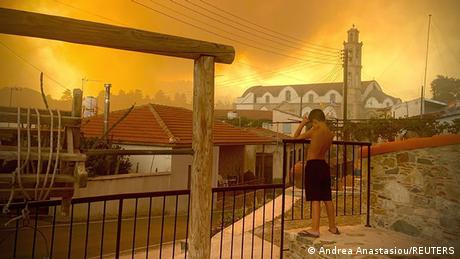 The victims died after a huge forest fire broke out on Saturday afternoon amid a blistering heatwave.

The blaze has destroyed around 55 square kilometers (21 square miles) and has since spread through the southern foothills of the central Troodos mountains.

A total of 36 people who were evacuated from their homes have been taken to hotels in the capital.

President Nicos Anastasiades said on Twitter that the blaze was "an unprecedented tragedy."

He added that it was the largest since 1974, the year that the island was divided after Turkey occupied its northern third.

Meanwhile, a 67-year-old man had been arrested on suspicion of starting the fire.

The dead were foreign workers

A total of four charred bodies were found outside the village of Odos in Larnaca district.

All four victims are thought to be Egyptian agricultural workers who went missing a day earlier.

The daily Phileleftheros newspaper said their bodies were found about 400 meters (437 yards) from their burnt-out vehicle.

Hundreds of firefighters and 11 firefighting planes have been deployed to stop the blaze, state radio broadcaster RIK reported.

On Sunday morning, they were focusing their efforts on two massive fire fronts between the villages of Odou and Vavatsinia.

Authorities are "cautiously optimistic" that they can make progress in beating back the flames, Interior Minister Nicos Nouris said.

But the president cautioned that "high temperatures and the wind are our biggest dangers."

"The government will provide immediate assistance to the victims and the families of the victims," said Anastasiades, who is on a tour of the fire-hit regions. He added: "We will not leave anyone abandoned in the destruction of the fire."

But some residents who lost homes said that authorities were too slow in mobilizing to fight the fire.

Cyprus has experienced extended heatwaves and periods of drought in recent years.

In the past few days, the temperature has hit 40 degrees Celsius (104 degrees Fahrenheit) inland. There has also been very little rain since mid-April.