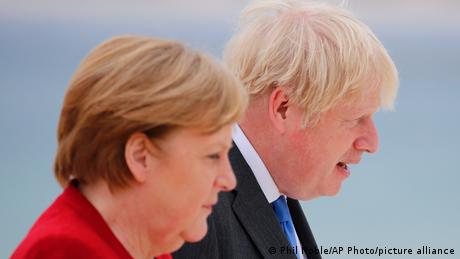 Ahead of the meeting, the German Green party's European spokesperson Franziska Brantner has warned against Germany going it alone in the post-Brexit relationship with London. "We need close and good relations with the UK on a new basis. But bilateral agreements and talks must not become divisive in Europe," Brantner told the AFP news agency.

Brantner criticized Germany and Britain's bilateral declaration of intent on security and foreign policy as premature.

"The German government should have waited with its declaration of intent until it had negotiated with the entire EU," Brantner said.

The UK prime minister has tweeted ahead of Merkel's arrival, saying he was "looking forward" to the visit.

He also repeated his comments a day earlier about "re-energized and re-invigorated" UK-German relations.

What's on the agenda?

First up is a visit to Chequers, the country retreat of British prime ministers, for a midday meeting with Johnson.

The COVID-19 pandemic is expected to be high on the agenda, with German authorities alarmed at the rapid spread of the delta variant of the virus in Britain.

It's expected that Johnson will press Merkel for an easing of quarantine restrictions on vaccinated travelers from the UK to Germany.

Johnson and Merkel are also expected to discuss Britain's post-Brexit relationship with the European Union – a topic that overshadowed discussions at the G7.

The leaders were due to discuss initiatives including an annual joint meeting of the British and German cabinets, as well as cultural and youth exchange schemes.

There will also be a rare honor, as Merkel is slated to be the first foreign leader in a quarter of a century to address the UK Cabinet.

After a press conference, the chancellor is set to have lunch with Prime Minister Johnson.

That will be followed by a helicopter trip to Windsor Castle near London, where Merkel is scheduled for an audience with Queen Elizabeth II.

Ahead of the visit

In advance of the trip, UK Prime Minister Boris Johnson praised the impact that Merkel has had on bilateral relations.

"Over the 16 years of Chancellor Merkel's tenure, the UK-Germany relationship has been re-energized and re-invigorated for a new era," he said in a statement.

The two leaders last met at the G7 summit in June in the English county of Cornwall, where they also held a bilateral meeting.

At the talks, Merkel urged Johnson to observe the legal terms of the Brexit agreement regarding trade to the UK province of Northern Ireland.