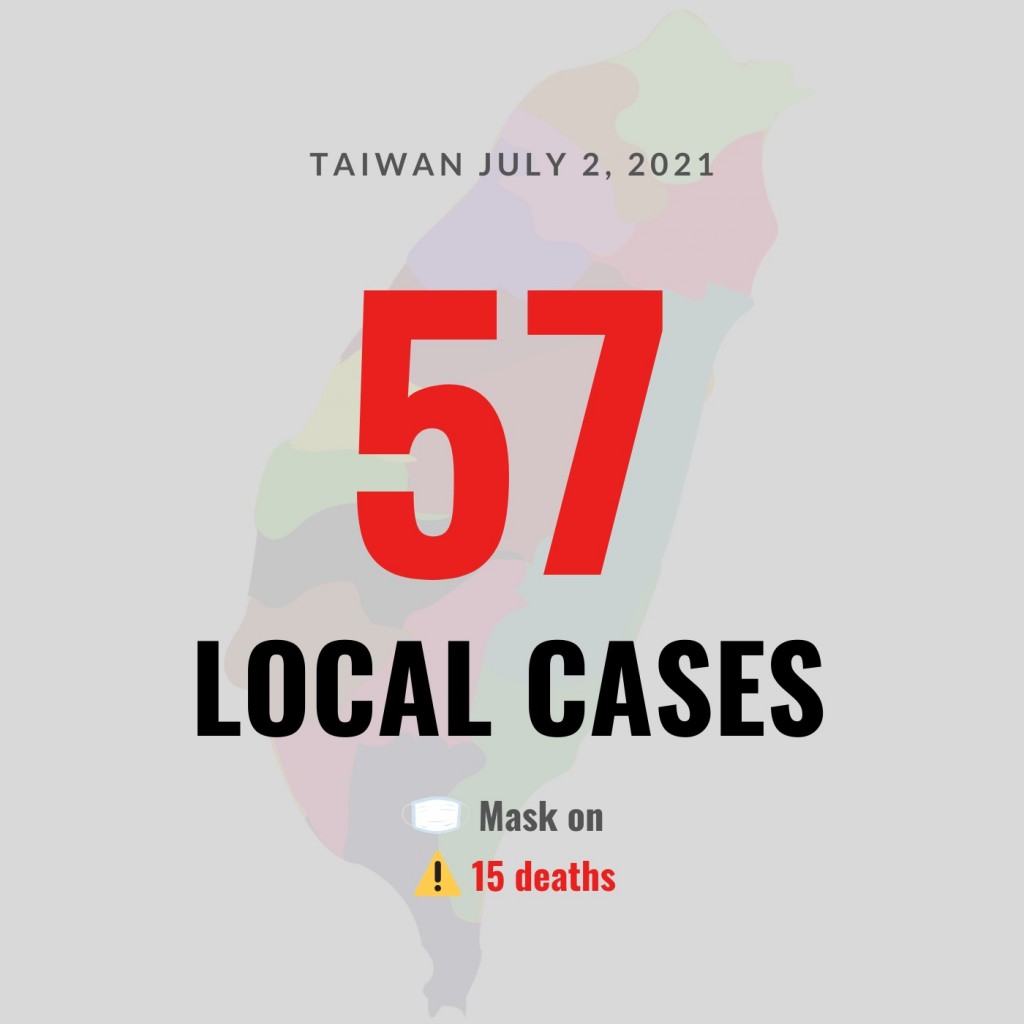 At a press briefing on Friday, Health Minister and CECC head Chen Shih-chung (陳時中) announced 58 new coronavirus cases, including 57 local cases and one imported one. He also announced 15 deaths, bringing the country's COVID death toll to 676.

The latest local cases include 25 males and 32 females between the ages of five and 90, with the dates of symptom onset and testing ranging from June 22 to July 1. Of these cases, 29 were found in Taipei City, 15 in New Taipei City, four in Hsinchu County, three each in Taoyuan City and Keelung City, two in Taichung City, and one in Hsinchu City.

Chen said the 15 coronavirus-related deaths reported on Friday include eight men and seven women between the ages of 40 and 80. The dates of symptom onset and testing ranged from May 25 to June 21.

The dates of diagnosis ranged between May 28 and June 28, while the dates of death ranged from June 3-30.

Chen pointed out that of the 13,605 cases announced between May 11 and June 30, 10,347 have been released from quarantine. This means the ratio of those released from isolation has reached 76.1 percent of confirmed cases.

According to Chen, Friday's sole imported case is a Taiwanese woman in her 50s, case No. 14,975, who returned to Taiwan from Hungary on June 28. As she had applied to attend a funeral on July 1, the health department tested her for the coronavirus, and she was diagnosed on July 2.

A total of 103 people have been removed as confirmed cases, while 14 cases are still under investigation. Up until now, 676 individuals have succumbed to the disease.

Of the 668 deaths from local infections, 343 were in New Taipei City, 256 in Taipei, 21 in Keelung, 20 in Taoyuan, 11 in Changhua County, five in Hsinchu County, four in Taichung City, two each in Yilan County and Hualien County, and one each in Miaoli, Taitung, and Yunlin counties and Kaohsiung City. The eight other deaths were imported cases.