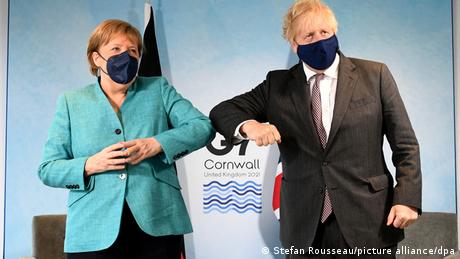 If A is for Angela and B is for Boris, then the C could just as easily stand for contrast as it could for conservative. The two politicians' public personas could scarcely diverge more.

"They differ hugely in style and political outlook. Angela Merkel's relatively steady levels of popularity derive from the perception that she is a reliable, sober and at times even comically serious politician," according to Katja Hoyer, a German historian living and working in England.

Johnson, on the other hand, has built a career in large part on joviality and on jokes, more often veering towards the seriously comic than the comically serious.

Possibly the biggest difference between the two politicians is their public approach to personal matters. Personal celebrity has been a core component of Johnson's political career from day 1, while Merkel will complete a 16-year stint as chancellor having managed to ring-fence her private life almost entirely.

"[Merkel] keeps her private life out of the limelight (most people would not be able to name her husband) while we know a lot about Johnson from the birth of his son to the name of his adopted dog to the color of his wallpaper," Hoyer says.

The outgoing German chancellor lacks the showman component so visible in her British counterpart and it is also extremely rare that she speaks in English in public.

Still, Simon Usherwood, politics professor at the Open University, believes that Merkel's lengthy tenure means she has accrued something of a reputation in Britain.

"I think the very rationalizing, evidence-led image of Merkel is one that stuck [in Britain] quite early on. This trope of her as a scientist, wanting to gather evidence before making a decision, is one that I think is quite clearly there. I think also her position as a leader who has been around for a long time does also cast a degree of gravity to her actions," Usherwood says.

Meanwhile, the Oxford classics graduate Johnson "enjoys public support precisely because he appears as a maverick — a politician who responds on instinct rather than careful thought," as Hoyer puts it.

But for all her staid and serious front, Merkel does have a reputation for a sharp sense of humor away from the cameras. Might this odd couple click better in private than at a press conference?

"I think the exchanges between them will be civil and friendly but their personalities are too different for genuine personal warmth in my opinion," Hoyer tells DW. "While it is true that there is more to Merkel's sense of humor than meets the eye, I doubt she will appreciate the slap-on-the-back type banter that Boris Johnson has to offer."

Asked whether any modern German politicians were at all comparable to Johnson, the historian suggestsSocial Democrat Chancellor Gerhard Schröder, "who got away with a lot due to his affable personality." Even if Johnson's personal recipe for politics might be alien to Merkel, Hoyer says plenty of German voters would understand the pull of a charismatic cad prone to the odd gaffe.

In what's liable to give both leaders a pang of deja vu after the past five years or so, the meeting will take place amid a temporary truce in the latest unresolved Brexit-related dispute, this time over exports of cold meats from Great Britain to Northern Ireland.

But for Simon Usherwood, a close observer of the Brexit process, EU member states have so far left this issue completely in the lap of the European Commission. He expects the talks to look to build on areas of direct bilateral cooperation with clear shared goals.

"What was really interesting for me was that this week, you also had the bilateral agreement between Germany and the UK on security cooperation, which suggests a willingness where there's a common cause to move things ahead. Also in NATO, the revival of that post-Trump: the British and the Germans have worked together well on that front. And Brexit, to some extent, is parked to one side," Usherwood says.

The 20-point bilateral agreement affirms the UK and Britain's commitment to the "strategic unity of Europe," also describing NATO as "the cornerstone of Euro-Atlantic security," with both sides pledging: "We remain jointly committed to NATO-EU cooperation."

The document was published in the immediate aftermath of England's win over Germany at Wembley in Euro 2020, another topic Merkel surely ought to be prepared to field questions on, at least from the press corps if not from the prime minister himself.

Friday's visit is Merkel's second trip to the UK this summer, following the G7 summit at Carbis Bay. At one of the earliest chances to showcase the "Global Britain" Johnson alluded to before and after the referendum, the specter of Brexit also haunted the feast.

That's at least partly because the prime minister elected to hold the summit in the fishing heartland of Cornwall, after protracted disagreements with Brussels on quotas and access.

Hoyer does not believe that Brexit will go down as one of the great regrets when Angela Merkel reflects on her time in office, purely because of a sense that the question was always out of Germany's hands.

"I don't think she sees it as anything she had any control over. There also seems to be a sense among those politicians in Germany who are less wedded to the European project that bilateral relations between Germany and Britain will continue."

Trust an issue for Berlin?

For all of Johnson's colorful past, whether it's comparing the EU to Nazi Germany late in the Brexit referendum campaign or his years of reporting from Brussels for the Daily Telegraph, Usherwood believes Merkel might have tolerated a lot of his earlier indiscretions as the things politicians say to win votes or gain support before taking up the highest office. His more recent track record as prime minister could be more problematic.

"What I think would have been much more concerning would have been things like last summer's move to introduce the Internal Market Bill; that would have dis-applied parts of the Withdrawal Agreement to Northern Ireland," Usherwood says. "That was done under Boris Johnson, at his approval ... and I think that really didn't help matters at all. Because if you're saying that you're prepared to sign a treaty that you're then going to walk away from, then what is left in all of this?"

Johnson did ultimately back down on implementing the most contentious parts of the bill in question, but only after stiff resistance at home and abroad.

What next after Merkel?

Usherwood and Hoyer differ somewhat on what might lie in store for Britain and Germany after Merkel's departure. Both are quick to stress how "all the major parties have pro-EU leanings and will endeavor to protect the Common Market against British competition," suggesting no sea change in position in Berlin.

However, Hoyer raises a prospect that could be music to Johnson's ears, a common theme of the Brexit campaign itself that is yet to materialize.

"I would not underestimate the power of the business lobby in Germany who have perhaps found it difficult to pressurize a figure of Merkel's standing but might be keen to push her successor into ensuring that Britain remains a lucrative and accessible market for German products," Hoyer suspects, saying that small bilateral deals designed not to capture too much media attention could become the order of the day. "Capitalism will find a way around politics. It always does."

Usherwood, on the other hand, describes "the notion that German car manufacturers were going to sort out the EU" as "naive to the point of ridiculousness on the part of the British" from the outset.

He also cautions that Britain might expect too much change when Merkel relinquishes the keys to the chancellery, forgetting how constrained German leaders typically are by both coalition government and the federal system. Whether Armin Laschet, Annalena Baerbock, or even Olaf Scholz should take up the baton, one thing seems certain, their personas will not clash quite so obviously as Merkel's and Johnson's do.