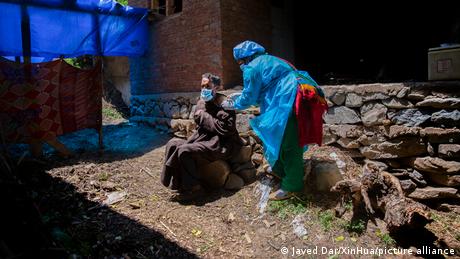 Zareena Bano, a health care worker from Srinagar city, has not been to her home for almost two months. She's currently on duty in India-administered Kashmir's northern Bandipora district, where she's carrying out a door-to-door COVID vaccination campaign.

In the village, Zareena reached out to two young women to inform them about the importance of COVID-19 vaccination but, to her surprise, they turned violent.

"I first talk to people and tell them about the importance of vaccination. It was a normal day when I tried to speak with two women who, in turn, started abusing and hurling rocks at us," the 26-year-old health worker told DW.

"I was a little scared at that time, but I understand that there is misinformation about vaccines and the impact of fake news on the rural population. My foot got hurt during the incident. But I am again doing my job normally because we need to keep fighting the pandemic," she said.

The video of the incident in which the health care workers, including Zareena, were attacked in the village went viral on social media, forcing authorities to take action against the attackers.

It also brought to light the challenges that health care workers in the region face during vaccination drives.

To make vaccines available to people in far-off areas, authorities kicked off the door-to-door vaccination campaign in June.

Given the rough terrain of the Himalayan region, the health workers sometimes have to make long walks for hours to vaccinate people.

Bashir Ahmad, another health worker posted in the northern frontier area of Gurez, which shares borders with Pakistan-administered Gilgit-Baltistan, once walked six hours to reach the village of Neeru Nallah in Tulail to vaccinate people.

Sometimes, he said, he has had to walk through snowy terrain to get people vaccinated.

"I belong to this place, so I was able to walk, otherwise it was very tough. I am vaccinating people and also organizing vaccination camps," the 40-year-old said.

Bashir was among the first health care workers to get vaccinated in the frontier area and since then he has been educating people about the benefits of vaccination.

"There are people who ask a lot of questions," Ahmad said, adding that it's his job to clarify them the importance of taking the jab.

"I make them understand in our language, and I tell them it's like wearing a helmet while driving a bike. It can protect them in a great way even if they face an accident," Ahmad said.

While reaching remote areas has not been an easy job for the health workers, the spread of misinformation and conspiracy theories makes their work even more challenging.

A few weeks ago, a fake message claiming that French virologist and Nobel laureate Luc Montagnier had said that all those receiving COVID vaccinations would die within two years went viral on WhatsApp.

It's because of such unverified and inaccurate information circulating on social media that many people in the region, particularly young women, have misconceptions about the vaccines.

"Some women are reluctant to get the shots, saying if they get vaccinated it will cause infertility and they will not be able to bear children," said a health care worker from southern Kashmir who asked not to be named.

"Our job is to debunk these myths. People shout at us but we remain calm and do our job."

Scientists and public health experts worldwide have repeatedly stressed that vaccination, along with adherence to hygiene and physical distancing rules, is the only way to bring an end to the COVID pandemic.

India-administered Kashmir has so far registered over 300,000 COVID cases and more than 4,200 related deaths.

Over 600,000 in the region have been fully inoculated so far while more than 4 million people have received at least one shot of the vaccine.

Mir Mushtaq, the spokesperson for the region's health department, told DW that while there have been "isolated incidents of attacks" on health care workers, the department "is making sure to reach every part of the region and inoculate people."

Vaccine hesitancy is a global problem, he pointed out, adding: "We are encouraging workers to counsel people. Some people blindly believe whatever they see on social media."

Overall, the department's vaccination outreach has proved to be beneficial, Mushtaq stressed.

"We are involving different groups of social and religious leaders to raise awareness among people. It's a new disease and there are apprehensions. This is also an evolving disease and people come to know more information day by day."