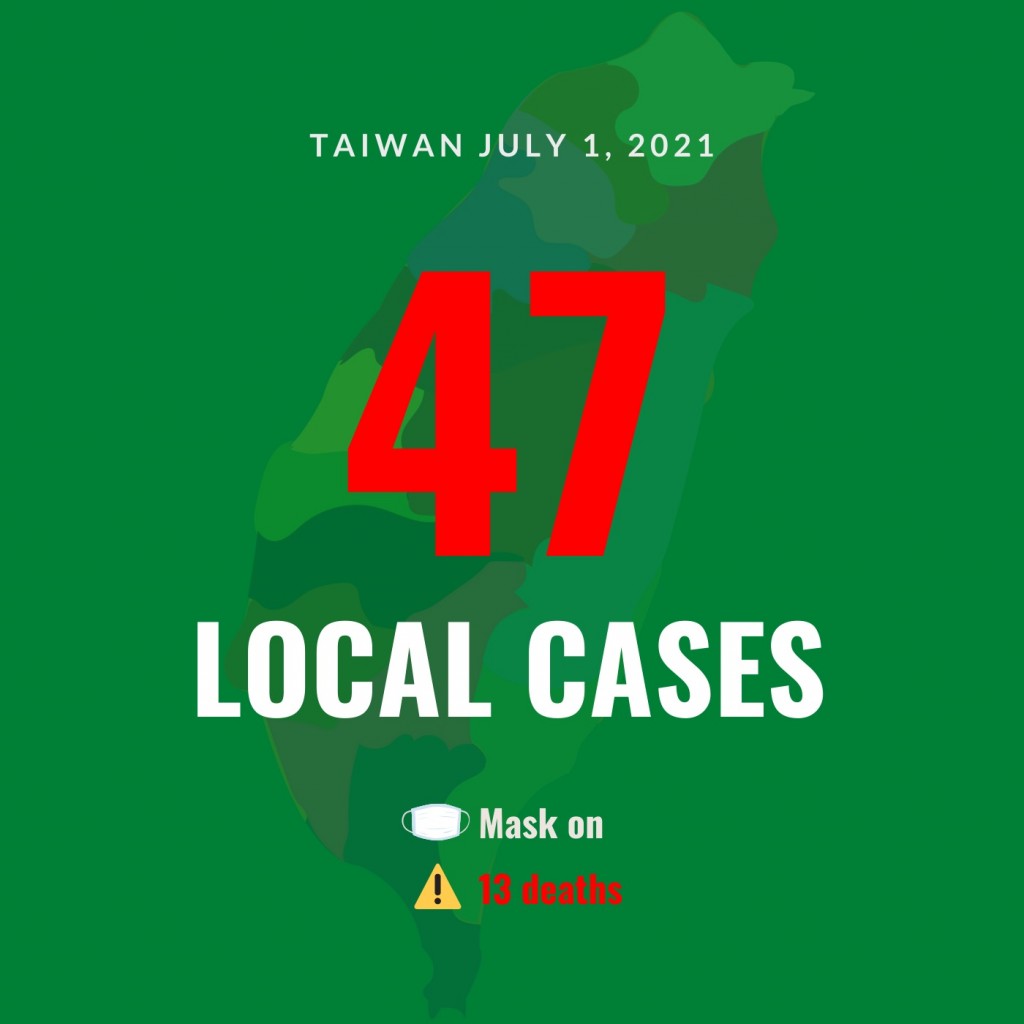 The latest local cases include 22 males and 25 females between the ages of five and 90, with the dates of symptom onset and testing ranging from June 22-30.

Of these cases, 20 were in New Taipei City, 18 in Taipei City, five in Taoyuan City, two in Kaohsiung City, and one each in Hsinchu City and Hsinchu County.

Chen said the 13 coronavirus-related deaths reported on Thursday include seven men and six women between the ages of 50 and 80. The dates of symptom onset and testing ranged from May 14 to June 18.

The dates of diagnosis ranged between May 18 and June 20, while the dates of death ranged from June 17-30.

Chen pointed out that among the 13,549 cases announced between May 11 and June 29, 10,306 have been released from quarantine. This means the ratio of those released from isolation has reached 76.1 percent of confirmed cases.

According to Chen, cases 14,926 and 14,927 are male Indonesian fishery workers in their 30s and 20s who had first arrived in Taiwan for work in December and recently returned from a voyage at sea on June 16. They underwent coronavirus tests on June 29, as their quarantines were set to expire, and the results came back positive on July 1.

Case No. 14,941 is a male fishery worker from the Philippines who came to Taiwan for work on May 13. On June 16, he was quarantined because some fellow crew members had tested positive for COVID-19. He was tested on June 29, as his quarantine was set to end, with the results coming back positive on July 1.

A total of 103 people have been removed as confirmed cases, while 14 cases are still under investigation. Up until now, 661 individuals have succumbed to the disease.

Of the 653 deaths from local infections, 334 were in New Taipei City, 251 in Taipei, 21 in Keelung, 20 in Taoyuan, 10 in Changhua County, five in Hsinchu County, four in Taichung City, two each in Yilan County and Hualien County, and one each in Miaoli, Taitung, and Yunlin counties and Kaohsiung City. The eight other deaths were imported cases.