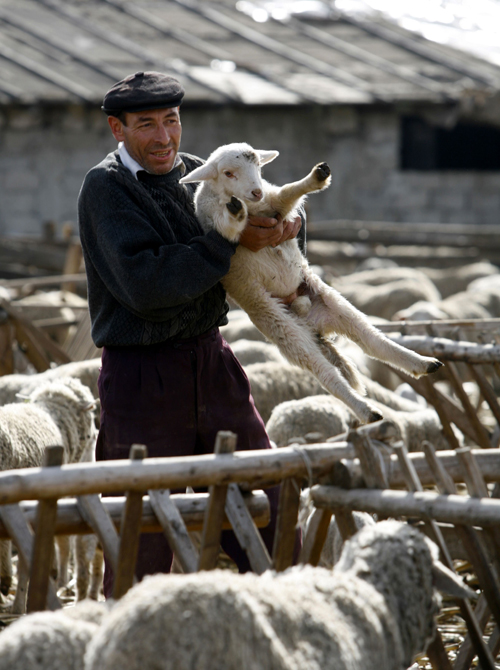 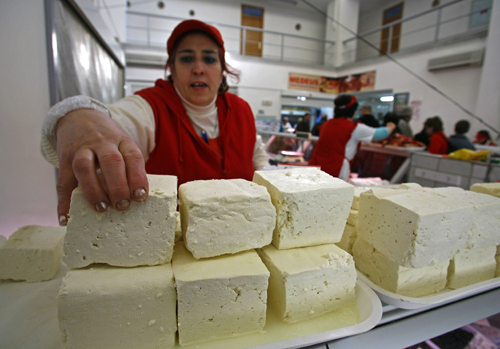 Serban Enescu is wondering how to bring milk coolers 1,500 meters up the Carpathian mountains to a sheepfold at the end of a rocky trail unreachable by car.
His weatherbeaten face creases as the Romanian shepherd ponders new food safety standards required by the European Union, which Romania joined at the start of this year.
Like thousands of other Romanian shepherds, he has until July to meet EU rules or be banned from selling his products.
If that happens, Enescu and many like him will be forced to give up their sheep. Some, seeing no clear alternatives to preserve their traditional livelihood in this poor, mostly rural country say they will seek other jobs abroad.
"Shepherds are already leaving the mountains because of harsh conditions. Many are confused, they sell their sheep and migrate to Italy, France, Spain," said Eugen Gontea, head of the dairy farmers' association in central Romanian Brasov county.
Like many other small-scale dairy farmers, Enescu has always made his cheese in mountain-top shacks, without electricity and running water, using wooden pots and recipes handed down for generations.
Many villagers still carve out a living by selling their products, such as branza de burduf - a very salty cheese pressed inside tree bark - at roadside stands to tourists.
"We knew harder conditions were looming once we joined the European community, but this dropped like a bomb," said Enescu, a 46-year-old veterinarian.
"If European community norms finish us, we will give up our sheep and our children will only see shepherds in a history museum," he said.
Little of Romania's economic vigor has spilled over to the poorly educated, conservative countryside where many villages still lack indoor plumbing, electricity and proper roads.
In coming decades, billions of dollars in EU aid will help diminish widespread poverty, modernize industry and bring living standards closer to western levels.
But three months after accession many small-scale farmers are confused both about EU requirements and the procedures for applying for aid cash.
Romania has struggled to meet EU membership requirements in agriculture, which employs one-third of the country's work force but produces only 8 percent of gross domestic product.
Now it risks losing EU export markets if food safety standards are not met - or seeing EU cash payments cut back if it fails to finish an operational database for animals, crops and land, called IACS.
Issues requiring attention
To avoid sanctions, Romania has to overhaul the sector: tackling issues from animal genetics, feed, health and hygiene to technology upgrades in food collection, processing, storage and distribution.
In the longer term it needs to consolidate thousands of tiny and unprofitable farms, to make agriculture efficient and less of a burden on state finances.
Data shows 85 percent of milk collected in Romania does not meet EU standards, and health officials say they see frequent minor cases of food poisoning from cheese.
The July deadline is for shepherds to register with local health authorities, allow inspections at least once a year and meet EU health standards.
Dairy farmers, who unlike large processors rely on direct trade, will also be confined to selling their products only in their counties from July - a common EU measure crucial to tracking back the origin of potentially harmful food.
But only a few have started preparing, and most lack cash to modernize production and do not know how to get EU funds.
They can sidestep market restrictions either by pooling resources and starting larger processing units, or by registering their products as 'traditional', which will allow them to sell their products nationwide - but will not exempt them from EU food safety standards.
"If the milk is produced up the mountain, it's not compliant," said an EU diplomat in Bucharest. "To be a compliant dairy it would be necessary to have cooling facilities and certainly running water."
Observers blame delays in implementation of EU rules on an inefficient and corrupt bureaucracy. Others also blame Bucharest's government for failing to ensure smooth transition towards EU norms for some of the poorest Romanians.
EU diplomats warn the cheese-makers' struggle to meet EU standards could become a problem if it keeps making headlines, by fanning euroscepticism and popular support for ultranationalist politicians now on the rise in Romania.
"Romania should have paid more attention to the implications of EU legislation and negotiated better protection, longer transition periods," said one EU diplomat in Bucharest.
"The cheese-makers are one example but other issues will crop up," he said.
Some rural dwellers can't see what all the fuss is about.
"We have made cheese for so many years and no one's died from it," said 53-year-old Dorica Cojanu, a tiny, red-cheeked dairy farmer from Moeciu.