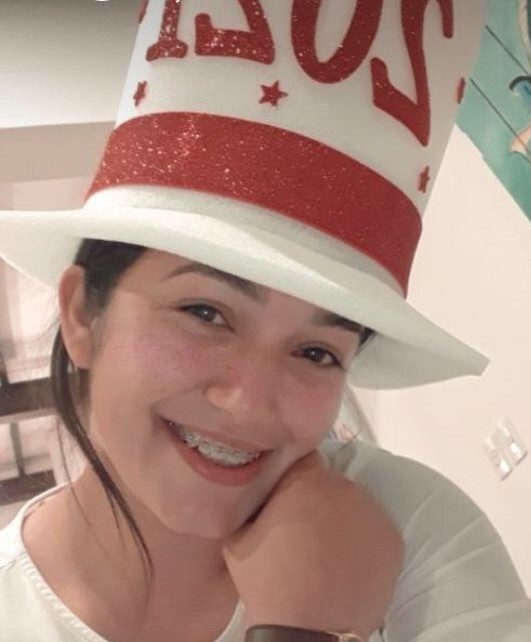 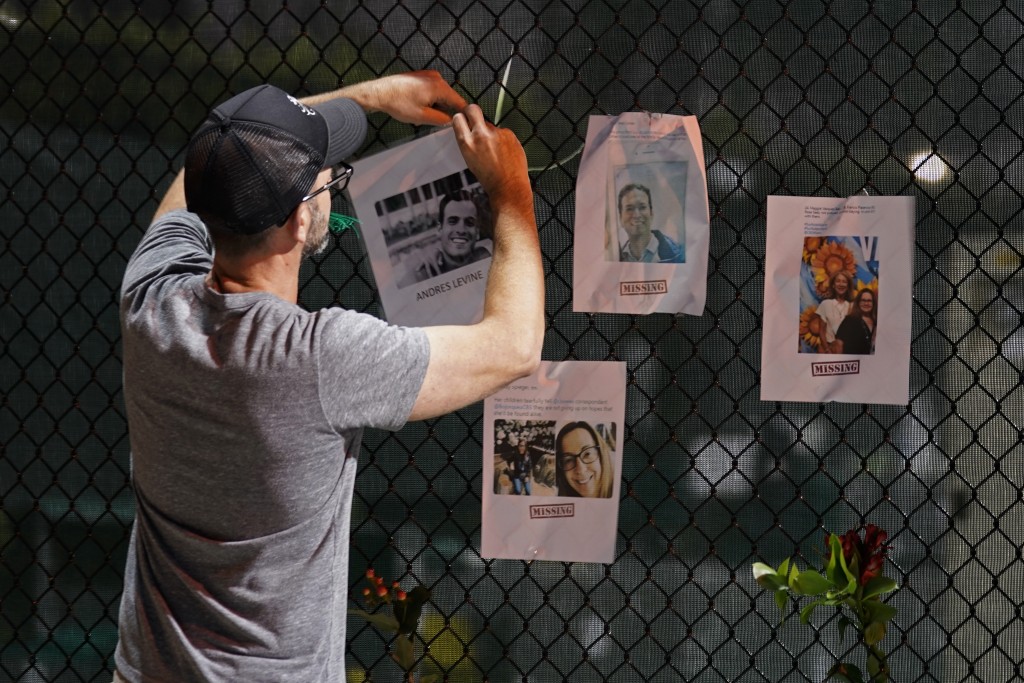 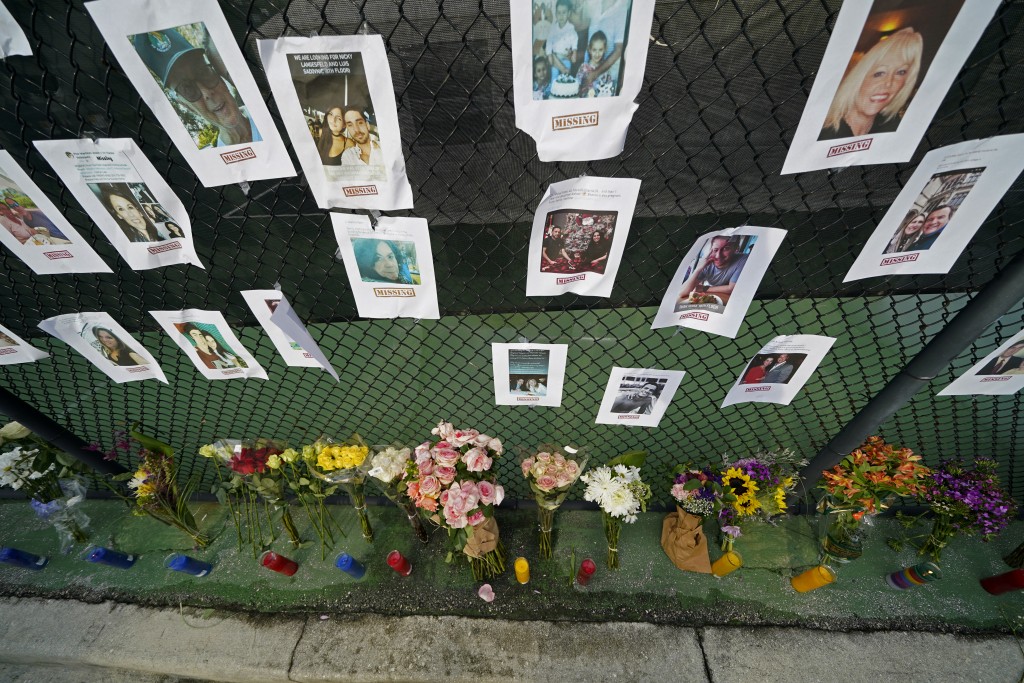 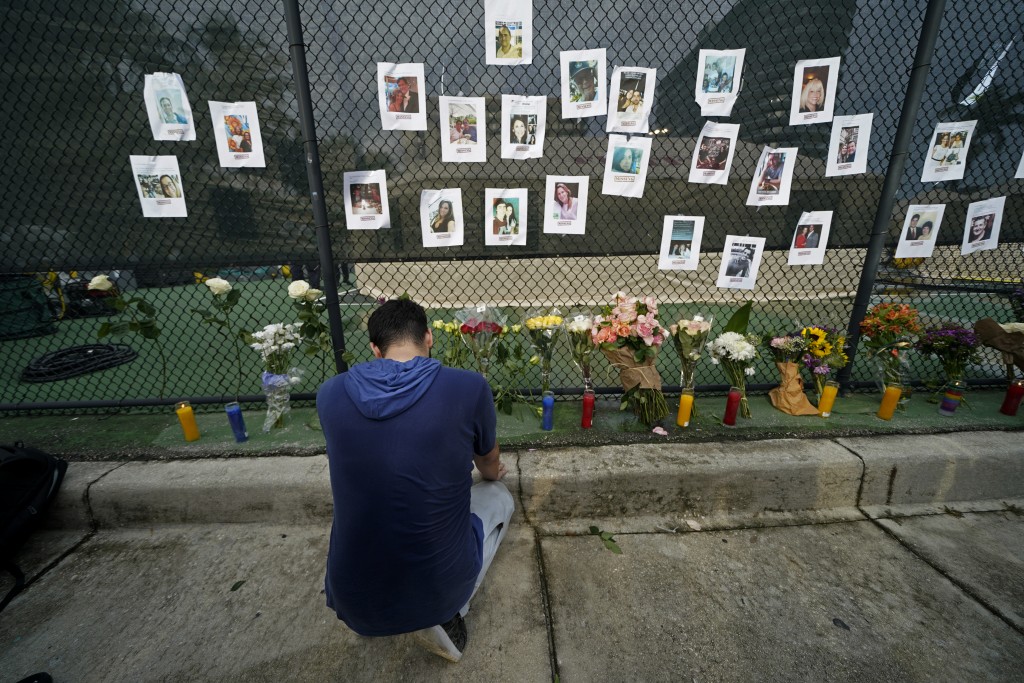 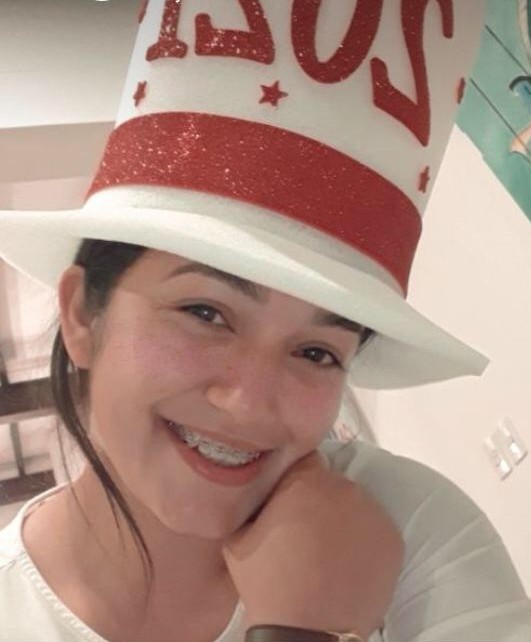 MIAMI (AP) — A Filipino-American who loved to play the piano and her Chilean husband lived on the 10th floor of the building. One flight down were Cuban immigrant grandparents who had dreamed of retiring at the beach. And just a week ago, a young Paraguayan arrived to work as a nanny.

The Champlain Towers South condominium was a true reflection of Miami’s international mix — South American immigrants, Orthodox Jews, foreign retirees. The 12-story building’s stunning collapse on Thursday quickly became a symbol of international tragedy, as families around the world hoped for news of loved ones in a terrified state of limbo.

Among them is Richard Luna, who is praying for a miracle but already speaking of his sister in the past tense. Lady Vanessa Luna Villalba, a nanny newly come from rural Paraguay, is among the 159 people still missing in the disintegration of the condominium into a smoldering heap of twisted metal and concrete in Surfside, Florida, just north of Miami.

“She had many hopes of progressing and helping our parents,” said Richard Luna, who is anxiously watching news reports in Paraguay. “We are emotionally devastated.”

Officials on Friday still didn’t know exactly how many residents or visitors were in the building at the time. A clearer picture emerged from diplomatic dispatches and overseas news reports: Israeli media said the country’s consul general in Miami, Maor Elbaz, believed that 20 citizens of that country are missing. Another 22 people were unaccounted for from Argentina, Venezuela, Uruguay and Paraguay.

By Friday evening, authorities had helped family members from over a dozen countries get visas to travel to Florida, Sen. Marco Rubio said in a tweet.

The horror of seeing hard-to-watch video of the tower’s collapse was compounded by the shock of its location: America.

“You don’t think that can happen here in the United States,” said Sergio Lozano Jr., whose grandparents Antonio and Gladys Lozano, both in their 80s, are among the missing.

The couple emigrated from Cuba years ago, and the elder Lozano, now retired, worked in banking. Until a day ago, they were living out their dream in unit 903 of the seaside tower.

“My grandfather always said when he retired, he wanted to retire on the beach,” said Lozano Jr. “He wanted to be able to walk out on his balcony and look at the beach.”

Lozano Jr. said his father woke up at 1:30 in the morning to a thundering noise that sounded like a tornado and went to his balcony to bring in the outdoor furniture. He looked out at the condo.

It was no longer there.

He called Lozano Jr. and woke him up with these words: “They are gone.”

Juan Mora Sr. and his wife Ana were also immigrants from Cuba, and part of a tight-knit Cuban American community. Their son Juan Jr., was born in the U.S. and worked as an executive for Morton Salt in Chicago. Throughout the pandemic, he stayed away from his elderly parents, but was visiting when the building collapsed.

“He was doing his best to keep them safe,” said longtime friend Danny Ugarte, who grew up with Juan Jr. He was the envy of his friends as a child, Ugarte said, because his mother worked for Delta Airlines and he got to travel the world.

Ugarte’s mother, Jeanne, was close with Ana Mora, who did so much for her community, her children, and her church — many times all at once. They took their sons as children to Santo Domingo on missionary trips to help build churches and bridges.

“She was a very devout Catholic, a genuinely caring and loving person,” said Ugarte, in an emotional telephone interview. “We would sleep on the ground on mats, and she was so dedicated.”

The Ugartes are trying to stay positive, but Jeanne is resigned.

Among six missing Colombian natives is a family of three that came to the U.S. weeks ago to get the COVID-19 vaccine and have a vacation.

Luis Fernando Barth, 51, the director of a nonprofit organization; his wife Catalina Gómez, a 45-year-old lawyer; and their daughter Valeria Barth, 14, are from the western Colombia city of Medellín. They were renting apartment 204 and were not supposed to be there. They had traveled to another beach location and planned to return to the rental on Thursday.

“Unfortunately, they decided to advance the trip, and arrived at the apartment again on Wednesday,” said the woman’s brother-in-law, José Luis Arango, who last spoke to them Wednesday evening.

For the Velasquez family, this was supposed to be a time of togetherness after the coronavirus pandemic had kept them apart.

Theresa Velasquez traveled from California to visit her parents, Julio and Angela. All three of them were in the building when it collapsed, said her uncle, Fernando Velasquez.

Julio, 66, born in Colombia, was a devout Catholic retired from the insurance industry. He enjoyed soccer and traveling with his wife, Angela, who owned a clothing store. He was also writing a book about religion, said his brother, who spoke to him on the phone almost every day.

“He was a breath of fresh air. He was a peacemaker. He was a joy,” said Fernando Velasquez, who lives in Elmhurst, N.Y. He called his sister-in-law, Angela, “a beautiful person,...always smiling, always ready to assist in any way, shape or form.”

Fernando had returned from an evening mass when he heard of the collapse and picked up the phone.

“I called, and of course you don’t get any answers,” he said. “That’s how you know.”

Fernando said he and his wife visited in April and slept in the condo, but he didn’t notice anything wrong.

Also among the missing South Americans was a prominent Argentinian plastic surgeon, his husband and their young daughter.

Dr. Andrés Galfrascoli, 45, has an office in Buenos Aires, but took his family to Miami because he couldn’t work in Argentina’s capital during the pandemic. His husband, Fabián Núñez, 55, is a producer and theater director.

“Andrés is one of the best surgeons in the country, very low profile, very honest,” a friend, Flavia Martínez, told a local TV station. “I spoke to him the day before yesterday, he told me that he was fine, that he was resting.”

The family had been in Miami since April and had enrolled their 6-year-old daughter, Sofía, in a local school. They were one of the first same-sex Argentine couples to have a baby by surrogacy, and had said they were eager for another child.

A Chilean man, Claudio Bonnefoy, and his Filipino-American wife, Maria Obias Bonnefoy, lived on the 10th floor of the building. The husband, 85, a lawyer, is the second cousin of former Chilean President and High Commissioner for Human Rights Michelle Bachelet.

His wife Maria, 69, was an artist who loved to play the piano and was very close to her sibling, Dulce Obias Manno. Manno said throughout the pandemic, her sister was extremely cautious, going out just to buy food — only to suffer this unexpected tragedy.

“My sister is everything for me,“ said Manno, 66, who traveled from Virginia in hopes of finding her sister alive. “She is my brain, my conscience, my model.”

Surfside is also home to a large Jewish Orthodox community, and families crowd the sidewalks before sunset walking to services for the Sabbath. In the Orthodox community, thoughts turned not just to the grim likelihood of multiple deaths but how to handle inevitable burials.

According to Jewish custom, true virtue or “Chesed Shel Emes” means the entire body and all its parts, including limbs, blood and tissue, must be collected for burial. Bodies are also not allowed to be left overnight or exposed in the open.

Zaka World, a volunteer organization in Israel, specializes in the painstaking work of collecting the entire body. International director David Rose, said in mass casualty disasters like that in Miami, they use DNA samples for blood and tissue, carefully collecting it from the concrete and other surfaces. In some cases, however, certain parts may not be matched to the deceased.

Rabbi Sholom D. Lipskar, the founder of The Shul of Bal Harbour, the Orthodox Jewish synagogue near the building collapse, said his community is still praying for miracles as rescue teams continued to search for survivors. He could not say exactly how many members of Surfside’s Jewish community were unaccounted for.

“It’s a very large group of people, unfortunately,” he said. “The circumstances are very, very grim.”