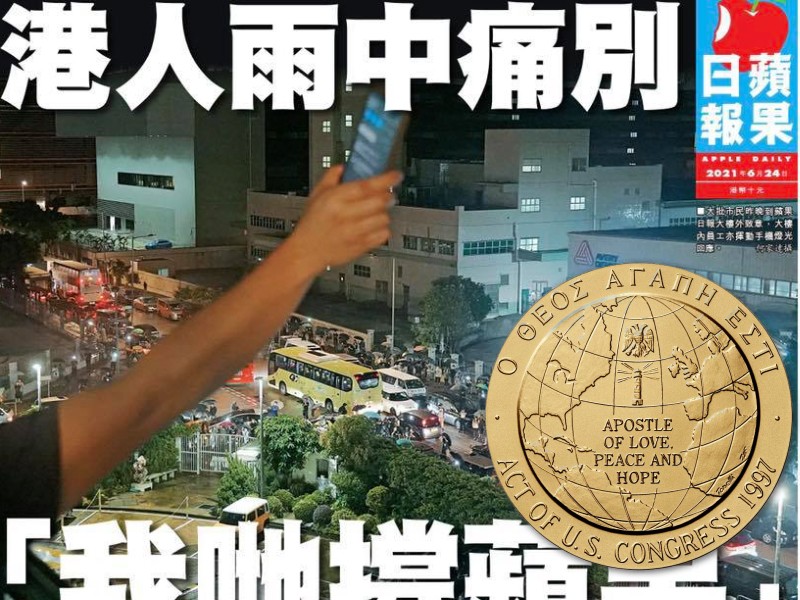 TAIPEI (Taiwan News) — U.S. Senator Ben Sasse has introduced a bill proposing to award the Congressional Gold Medal to the staff of Apple Daily after the Hong Kong newspaper was forced to shut down by the city's pro-Beijing government.

On Thursday (June 26), Apple Daily released 1 million copies of its final issue with the title, "We support Apple Daily – Hongkongers mourn in the rain."

The newspaper was founded in 1995, two years before the British colony returned to China. In its first issue, the Apple Daily emphasized that it was a newspaper for Hongkongers.

As Bejing clamped down on freedom of speech in Hong Kong, Apple Daily founder Jimmy Lai was arrested three times in 2020 on multiple charges and is currently serving 20 months in prison for participating in unauthorized assemblies.

"Apple Daily has made many mistakes and sometimes failed to meet the expectation of our readers, but we have no regrets in the past quarter-century," Lai once said.

“The Apple Daily journalists exposed (Chinese) Chairman Xi as a man afraid of the people he seeks to hold down. The free world owes them our gratitude, and the least we can do is award them the Congressional Gold Medal,” the Nebraska senator said in a statement.

The Congressional Gold Medal is the American legislature's highest expression of national appreciation for individuals and institutes. Past recipients include the crew of the Apollo 11 spaceflight and 1991 Nobel Peace Prize laureate Aung San Suu Kyi.

In an open letter, Senators Pat Toomey and Chris Van Hollen urged U.S. President Joe Biden to sanction those involved in the crackdown on Lai and Apple Daily. The letter mentioned a Reuters report that exposed an order from Hong Kong Security Secretary John Lee demanding that HSBC and Citibank freeze Lai’s accounts and warning that failing to cooperate might lead to seven years in prison.

The senators stressed that this threat came from a single official outside the judicial system and proves that rule of law no longer exists in Hong Kong.