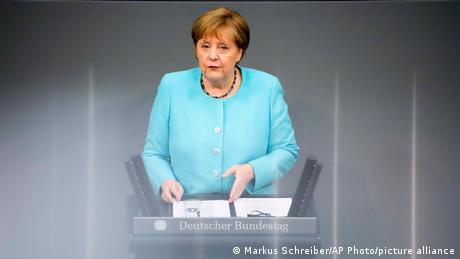 German Chancellor Angela Merkel on Thursday delivered what could be her last government statement in her nearly 16-year term.

The statement came ahead of an EU summit with the 27 heads of state, which will begin this afternoon in Brussels.

She started by addressing the coronavirus pandemic.

"For more than a year and a half, the fighting of the coronavirus pandemic has kept us holding our breath, at home and internationally, in the G7 and G20 countries, as well of course as at the EU level in particular," she said.

"In the meantime, we in Europe can be cautiously optimistic. For not only in Germany, but in most member states, case numbers are sinking considerably, and in conjunction with that the number of vaccinated people is rising."

Concerns over spread of delta variant

Germany recorded just over 1,000 new cases on Thursday, a figure significantly lower than the number of new infections reported at the height of the pandemic. The seven-day incidence rate now stands at 6.6 cases per 100,000 people per week. However, health officials are still on guard as the more transmissible delta variant spreads throughout Europe.

"Even we in Europe and in Germany are still skating on thin ice. We must remain watchful, new variants in particular, notably the delta variant, mean we must be cautious," Merkel said.

EU health officials predicted Wednesday that the variant could make up 90% of all new cases across the bloc by the end of August. In Germany, the delta variant now makes up about 15% of new cases, according to the country's disease control agency.

The chancellor also spoke out strongly against suspending patent protection for coronavirus vaccine manufacturers. Merkel said she backed increasing the production of vaccines for poorer countries through increased licensing.

But she told lawmakers: "In contrast, I consider a politically obtained release of patents to be the wrong way to go." The development of vaccines would only succeed, she said, if intellectual property protection was upheld.

EU must respond to Russia in a 'unified way'

Merkel also called for the EU to stand together against "provocations" from Russia, but said the bloc should also seek direct talks with Russian President Vladimir Putin.

"The events of the last few months, and not only in Germany, have clearly showed that it's not enough for us to react to Russia's numerous provocations in an uncoordinated way," said Merkel. "Instead, we must create mechanisms to be able to respond to provocations together and in a unified way. Only then will we learn to counter Russia's hybrid attacks."

Also on Thursday's docket in the Bundestag, politicians were expected to discuss the possibility of a COVID passport, the progress of vaccination campaigns and the final report of the committee of inquiry into the terrorist attack on the Berlin Christmas market in 2016.