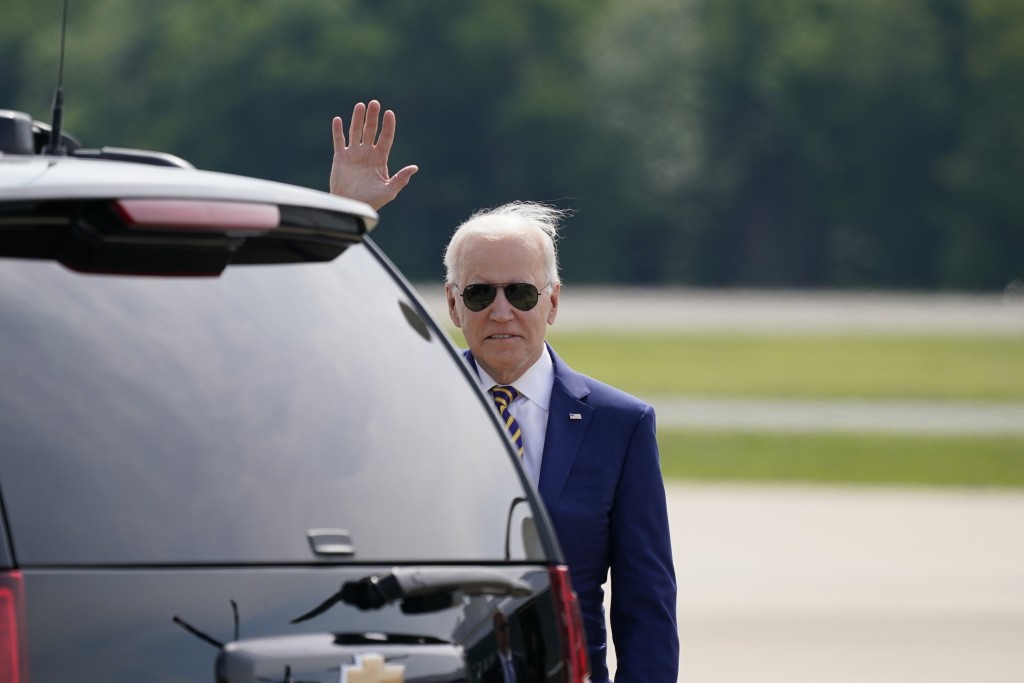 Joe Biden set the right tone during his first trip abroad as U.S. president, first at the G-7 summit and then as he sought broader support from NATO leaders. While Biden has accomplished many of his stated goals, the grand prize is an alliance to isolate China.

This kind of aim is not new; it is reminiscent of how the U.S. isolated the former Soviet Union during the Cold War. When U.S. concerns over its rival's expansionism were at their height, President Reagan knew he had solid NATO support and decided to take action to improve relations with China to further isolate the USSR.

The Soviet Union's economy was stagnating when Mikhail Gorbachev became general secretary, with an annual national income estimated to be growing at less than 2 percent from 1976-1985. Gorbachev took action to reform underlying political and social structures, but the isolation and economic downturn ultimately resulted in the state's collapse in 1991.

Before his recent European tour, Joe Biden expressed that “This trip is about realizing America’s renewed commitment to our allies and partners and demonstrating the capacity of democracies to both meet the challenges and deter the threats of this new age.” His mission was primarily to persuade allies that Beijing is the more significant long-term threat. This time, Moscow is not perceived as a significant threat to the global order, as its economy is suffering, in part from the sanctions imposed by the U.S. and its allies.

Biden’s approach is already quite clear. Despite the importance of China, the first high-level Sino-U.S. meeting of his administration took place only after Biden had attended the Quad virtual summit and top American officials had visited Seoul and Tokyo. Biden's first face-to-face meeting with Xi Jinping (習近平) as president is not likely to take place until the G20 summit in October.

The first high-level U.S.-China summit in Anchorage, Alaska, signaled a rocky start for the relationship. China’s top diplomat Yang Jiechi (楊潔箎) lectured U.S. Secretary of State Antony Blinken and National Security Adviser Jake Sullivan that the U.S. "isn't qualified to say that it wants to speak to China from a position of strength."

One U.S. official subsequently told the media that the Chinese delegation seemed "to have arrived intent on grandstanding, focused on public theatrics and dramatics over substance." The display more likely reflected China’s frustration and a desire to send a strong message: China stands ready to challenge American hegemony.

Indeed, China feels confident it will soon overtake the U.S. as the world's largest economy. Beijing believes nearly every country needs China’s market and will therefore have to concede to its demands. Its economic coercion and wolf warrior diplomacy have until recently met few challenges.

This confident posture was apparently elevated after the 2008 Summer Olympics and further reinforced by the financial crisis of 2008-2009, as China was credited with helping boost the global recovery.

China is also eager to flex its muscles with its growing military capabilities. When discussing a territorial dispute in the South China Sea at the ASEAN Ministers Conference in 2010, Yang famously told Singapore's foreign minister that "China is a big country and other countries are small countries, and that's just a fact."

Since Xi became the Chinese Communist Party's (CCP) secretary general in 2013, he has repeatedly emphasized “the Chinese Dream of national rejuvenation” as the party’s “original aspiration” and “mission.” He has also presented China’s growth model — its "Socialism with Chinese characteristics" — as an alternative to Western capitalism.

Xi has since proclaimed that “The East is rising and the West is declining,” and that “The United States is the biggest threat to our country’s development and security.”

But China has been on the rise for more than three decades. Can this trend continue, even amid the current supply chain decoupling? It's worth pointing out that the U.S. has a long history of recovering from deep crises.

National Security Adviser Sullivan put it very well when he responded to Yang: “A confident country is able to look hard at its own shortcomings and constantly seek to improve. And that is the secret sauce of America. The other secret sauce of America is that our people are a problem-solving people, and we believe we solve problems best when we work together with allies and partners around the world.” This sums up Joe Biden’s strategy to compete with China and isolate it by working in tandem with its friends.

Biden’s campaign for a new alliance to isolate China

Biden is trying to win back international support by emphasizing the fundamental values that democratic countries share and sympathize with. He has framed the Chinese threat as a competition between democracy and autocracy, reminded us of China’s human rights abuses and expansive territorial claims, and urged allies to cut CO2 emissions in line with the Paris Accord as coal-dependent China continues on as the world's largest emitter.

These are reasons why the U.S. succeeded at rallying its closest democratic partners during the G7 and NATO summits.

Although Biden has yet to announce a comprehensive China policy, he is clearly retaining elements of his predecessor’s tough stance toward Beijing, including competitive rhetoric and at least some Trump-era tariffs. The Wall Street Journal wrote that the Biden White House believes “some of the work the Trump administration was doing was essential” but that it was “done in a way that wasn’t necessarily sound and wasn’t built on a framework that could be broadened to include allies and partners.”

Working with allies and partners is exactly what the new administration is doing now. Secretary Blinken has encouraged NATO to “deepen” cooperation with its allies in the Indo-Pacific, including Australia, New Zealand, South Korea, and Japan, as the U.S. seeks to confront “systematic challenges” from China.

And the Brussels Summit Communiqué confirmed that NATO members are stepping up their dialogue with regional partners “to promote cooperative security and support the international rules-based order.”

As for the G7, its leaders agreed on pushing for a timely, transparent, expert-led, and science-based Phase 2 study into the origins of COVID-19. This is an issue of keen interest to the world, but China has been anything but cooperative on it.

To meet the global demand for vaccines, the G7 also committed to donating 1 billion doses to countries in need, and the U.S. has pledged to donate half a billion coronavirus doses to the world.

The leaders also confirmed their commitment to a "green revolution" that would limit the rise in global temperatures to 1.5 degrees Celsius, with the aim of achieving net-zero carbon emissions by 2050. In addition, they agreed to jointly mobilize billions of dollars to help countries reduce their reliance on coal power, putting additional pressure on China.

In addition, the leaders adopted a sharp tone toward Beijing, reprimanding it for its human-rights abuses and practice of forced labor. In a joint statement, the G7 called on China to respect human rights and freedoms in both Xinjiang and Hong Kong, adding member states would direct their trade ministers to work to eliminate “all forms of forced labor in global supply chains.”

Finally, G7 members will be collaborating with the private sector on "collectively catalyzing hundreds of billions of dollars in infrastructure investment for low and middle-income countries that need it." This plan has been called the "Build Back Better World" initiative to help contribute to the US$40 trillion-plus worth of infrastructure needed in the developing world — an answer to China's vaunted Belt and Road Initiative.

A trap in the making

Joe Biden has called China “America’s most serious global competitor” and vowed to lead an international campaign to “pressure, isolate and punish China.” He knows all too well that without decisive action, China is on track to surpass the U.S. both economically and militarily in the coming years.

This trend is particularly alarming considering that the American economy has been financed by debt to an unthinkable degree. The U.S. national debt currently stands at over US$28 trillion. Without dollar hegemony, the country cannot possibly finance its growth.

Militarily, as the retired commander of Indo-Pacific Command, Admiral Philip Davidson pointed out, China may outgun the U.S. in the Western Pacific by 2026, which would mean Beijing could decide to change the regional status quo.

To deter China, the U.S. will need the support of allies. Biden has succeeded at convincing NATO leaders of the threat China poses to stability in the East and South China seas and specifically around Taiwan, as expressed in the summit’s communiqué. In addition, the U.K., France, and Germany will soon be sending warships through the Indo-Pacific.

The increased Chinese military activity near Taiwan may be intimidating, but the U.S. is undeterred. To serve as a warning, National Security Adviser Sullivan reiterated the country's commitment to its "one-China" policy, the Taiwan Relations Act, the Six Assurances, and to opposing any unilateral changes to the status quo.

Washington's new China sanctions, delivery of arms to Taiwan, and elevation of its relationship with Tai[pei, including the delivery of COVID-19 vaccine doses by a military plane, are all provocations to Beijing. The pro-Taiwan legislation proposed in Congress is no less exasperating.

To respond or not to respond — that is the question for Beijing. If China decides to double down on its harassment of Taiwan, however, there are American red lines that it risks crossing.

Dr. Chen Chung-Hsing is the director of the New Economic Policy Research Center and a professor at National Dong Hwa University.