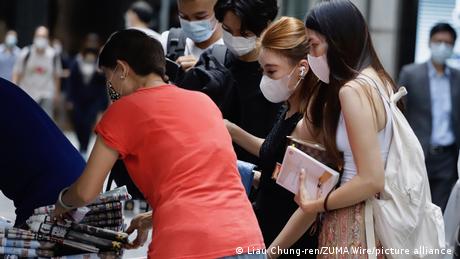 A day after 500 police officers raided its newsroom and arrested five executives, Hong Kong's pro-democracy newspaper Apple Daily printed 500,000 copies featuring the raid and the arrest on its front page.

"We must press on," read the headline, citing a passage from the paper's CEO Cheung Kim-hung.

On Friday, police formally charged Cheung and Editor-in-Chief Ryan Law with "collusion with foreign power." The other three executives are facing further investigation.

Hong Kongers across the city lined up in the morning to try to secure a copy of the paper following Thursday's raid. Sales of Apply Daily spiked on Friday, and many customers bought several copies to show support for the paper, newsstand owners said.

Despite the defiant mood, the dramatic raid and arrest have sparked a new wave of concern among experts and observers, with some characterizing the operation as an obvious assault on press freedom in Hong Kong.

"The police have repeatedly detained the owner of the paper, raided its newsroom twice and arrested the executives twice," Maya Wang, a senior China researcher at Human Rights Watch (HRW), told DW.

"If we take into account other restrictions of press freedom that happened over the last few months, I think it'll be really hard to argue that this is legitimate law enforcement," she added.

Thursday's operation was the second time in less than a year that police from Hong Kong's national security department have raided the media outlet's newsroom.

The paper's founder, Jimmy Lai, has been held in detention since late last year and is facing multiple charges, including charges under the national security law (NSL). The trial for his NSL case has been postponed to July 27.

Yuen Chan, a senior lecturer of journalism at City, University of London, said journalists in Hong Kong have been left to guess to what extent their work will be viewed as seditious under the NSL.

"Thursday's action still left the community reeling," she told DW. "Everyone has a sword of Damocles dangling over them. There is fear fueled by uncertainty and these latest actions exacerbate those fears," she added.

"We now know that journalists can be arrested for the words they write, but we are not told which articles crossed the red lines," said Chan, who also used to work for several Hong Kong media outlets.

Since the implementation of the NSL almost a year ago, Hong Kong has undergone a lot of changes. According to data collected by the Georgetown Center for Asian Law in the United States, the national security department under the Hong Kong Police Force has arrested 113 people since May 3.

The data showed that 92 arrests were made under the NSL and 21 people were arrested under crimes not covered by the NSL.

"According to publicly-available information on the cases that have emerged thus far, the vast majority of NSL arrests would not be considered national security cases in other rights-respecting jurisdictions," wrote Thomas Kellogg, Executive Director of Georgetown Center for Asian Law, and Lydia Wong, a political scientist, in a piece published by ChinaFile last month.

"The arrests thus far suggest the NSL is being used to punish the exercise of basic political rights by the government's peaceful critics," they added.

Eric Lai, a Hong Kong law fellow at the Georgetown Center for Asian Law, said the implementation of the NSL has damaged a lot of rights that were previously guaranteed under Hong Kong's legal system.

"In one NSL case in Hong Kong, the court followed the NSL to deny a jury trial at the level of high court, which has long been practicing jury trials at that level," he told DW.

Another worrying trend is the revival of "draconian laws" from the colonial era initiated by the Hong Kong government, Lai added. He said these laws are often used to silence and slap activists with more severe punishments.

"With the enactment of the NSL, the government thinks they don't have much concern to wipe out as many opponents as they can," he said.

"… Our data also shows that the (national security) department arrests people with non-NSL charges. This is another piece of evidence that shows how the institution is trying to use both the NSL and existing criminal laws to silence the opposition," Lai added.

For Lai, the law "criminalizes free speech" and "censors film screening and textbooks through the justification of national security."

"It would be the driving force for the Chinese government to transform Hong Kong society from a tolerant and pluralistic society to a monolithic and autocratic society," he stressed.

Wang, from HRW, warns that the NSL "is aimed to reshape the entire society and all the institutions in Hong Kong,"

"It's about making them pledge loyalty to the Chinese government, as well as training people to conform to Chinese Communist Party rules," she said.

Despite the pessimistic prospects for Hong Kong's future, Wang says people in the city can still use the space they have to exert their rights, even if it comes with escalating costs.

"We will have resistance and reaction, and there is also a network of diaspora outside of Hong Kong mustering all kinds of resistance," said Wang. "I think the outcome is still very unclear and there will be a lot of resistance to [Beijing's effort to control Hong Kong] from different levels."