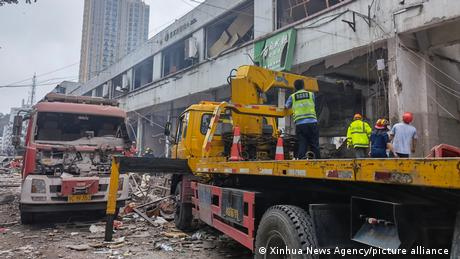 The blast happened in Shiyan, a city of more than 3 million people, in central Hubei province.

At least 12 people were killed, and more than 150 people hospitalized, of whom 37 were said to be in a serious condition, reports said.

Officials said at least 150 people were evacuated, adding that many people were left trapped.

Where did the explosion take place?

The explosion ripped through one of the city's food markets at around 6.30 a.m. local time (2230 UTC/GMT Saturday), according to state broadcaster CCTV.

The large market complex, which was already filled with shoppers and local residents eating breakfast, collapsed in on itself shortly after a loud explosion, Hong Kong's Apple Daily newspaper quoted an eyewitness as saying.

A video posted to social media purported to show heavy damage to several buildings and cars.

An investigation into the cause of the explosion has been launched.

Hospitals in Shiyan are asking residents to donate blood, as those injured are still under emergency treatment, CCTV reported.

The explosion in Shiyan came a day after eight people died and three others were injured when toxic methyl formate leaked from a vehicle at a chemical facility in the southwestern city of Guiyang. Further investigations are still ongoing.

Weak safety standards, poor maintenance and corruption have led to a number of industrial disasters in China.

In 2015, a massive blast at a chemical warehouse in Tianjin, northeastern China, killed 173 people, mostly firefighters and police officers.

Authorities said illegal construction and unsafe storage of materials were to blame.