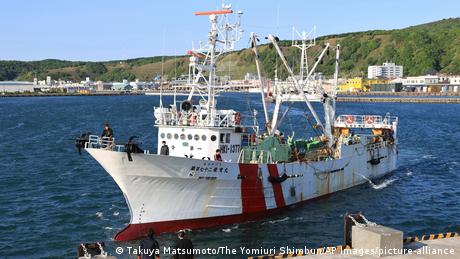 A Japanese fishing boat returned to the Wakkanai Port in Wakkanai City, Hokkaido, on Friday, days after it was seized by Russian authorities.

Why did Russia seize the Japanese boat?

The Eiho Maru No. 172 fishing boat was seized by the Border Service of Russia on May 28. It was operating between Japan's northern island of Hokkaido and the Russian Far East. The fishermen were taken to the Sakhalin Port.

Moscow said the boat was operating in Russian waters. However, the Japanese government maintained that the vessel was operating legally, demanding the release of the crew.

"The fishing boat was operating inside Japan's exclusive economic zone," Kato maintained, adding that Tokyo had lodged a diplomatic protest over the seizure.

Japanese authorities are also investigating reports that the crew was forced to pay fines of 6 million Russian rubles ($83,600, or €68,600) to secure their release.

Japan and Russia both claim four islands in the region. Moscow, which controls the islands, refers to them as southern Kurils, while Tokyo calls them the Northern Territories.

The sovereignty dispute has kept the countries from signing any formal peace treaty since World War II.