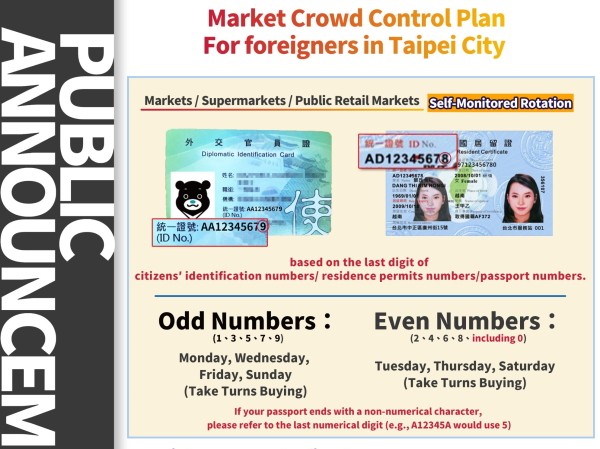 TAIPEI (Taiwan News) — As part of tightened measures under an extension of the Level 3 alert, Taipei City Government announced on Friday (June 11) that entrance to markets based on Taiwanese ID cards and Alien Resident Certificates (ARC) will go into effect on Saturday (June 12)

At a press conference on Friday afternoon, the city government announced that its new market control plan for both Taiwanese citizens and foreign residents will take effect on Saturday. In order to control the size of crowds, admittance to markets, supermarkets, public retail markets, and megastores will be limited by the last digit of the identification card for both Taiwanese and ARCs for foreign residents.

For people whose card ends in an odd number, they will be allowed to enter these markets on Monday, Wednesday, Friday, and Sunday. For ID cards that end in an even number, their holders can enter the markets on Tuesdays, Thursdays, and Saturdays.

The same is true for foreigners, who must present their ARCs, the last digit of which will determine which days they can enter, also based on the same even and odd numbering system. However, if foreigners do not have an ARC card, they must present their passports instead.

In such cases, the last digit of their passport number will determine which days they can enter the market. Diplomats can use their diplomat ID card.

Adam Yi (益子翔), deputy executive director for the mayor's Office of External Affairs, told Taiwan News the restrictions on weekdays will not be enforced but "are recommended." However, on weekends IDs will be carefully inspected and the rules strictly followed.

Any violators of this ID regulation, Taiwanese or foreign, could face a fine of between NT$3,000 (US$108) and NT$15,000. These fines will be imposed on weekends, beginning on Saturday. 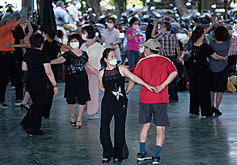