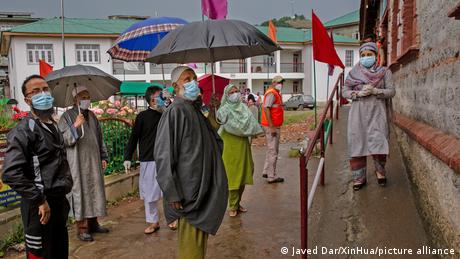 In the congested Basant Bagh locality in India-administered Kashmir's Srinagar city, Shabnum Subhan, 45, who identifies herself as a transwoman, received a call from a friend in May 2020. The friend told her she was feeling sick.

At the time, the region was struggling with the first wave of the COVID-19 pandemic.

When Subhan reached her friend's rental room, she found her struggling even to stand up.

Subhan managed to call an ambulance through an activist and accompanied her friend to the hospital.

Her friend suffered chills and pain in her arm and back. Subhan feared her friend might be COVID-19 positive, but when people enquired, she was quick and cautious to hide any suspicion of the illness, fearing stigmatization.

"I said she fractured her arm and leg by slipping down. I feared if I told them she was sick they might blame us for spreading coronavirus in the locality," Subhan told DW from her home in Srinagar.

The transgender community in the region has been suffering silently. Many of them have been abandoned by their families. Others have left home after relatives refused to support them.

Over the years, transgender people in the region have typically made ends meet by performing at weddings or offering matchmaking services.

But after three consecutive lockdowns that began from August 2019 when the government abrogated Article 370, which granted special constitutional status to the region, members from the transgender community found themselves struggling to find work.

Subhan used to be able to earn a living by singing at weddings three years ago, she recalled. But most of the time she is now restricted to her home.

"We live alone and are suffering silently. There is no work, I crave to sing and dance in weddings but there is no chance to do that," she said.

There are nearly 4,000 transgender people in India-administered Kashmir, according to the last census in 2011. Subhan said her community often faces shame and stigma in the region's conservative Muslim society, making them feel "worthless and inferior."

In illness or joy, Subhan said they find themselves alone.

"The last time I was very ill, I did not visit a hospital but consulted a doctor online. There was a lot of fear inside me," she said, adding that access to health care has become even more difficult.

Subhan's life has not been easy. She left home more than 30 years ago at age 16, with just a pair of sandals and a sling bag.

Her family tried to pressure her to "behave normal."

Muhammad Aslam, who goes by the name of Babloo, said the elderly members of the transgender community in the locality of Dalgate are suffering.

"If any of us had no food, those of us who earned would help but now we are all in the same situation, making us helpless," said Babloo, who had earned a living from matchmaking and singing at weddings for the past three decades.

Babloo said people no longer allow them to visit their homes during the pandemic as many fear that transgender people can be the carriers of the virus.

"Our only options of livelihood have completely shrunk," Babloo told DW.

The last wedding that Babloo had worked at was at the end of 2020 when the government eased restrictions.

"Most people in our community live in rented places. They have to pay the rents, they have to pay electricity and water supply charges," Babloo added. "This helplessness is mentally traumatizing."

For the past few decades, authorities in the conflict-stricken region have failed to implement a number of welfare schemes designed for the people in the transgender community.

In May, scores of transgender people protested in Srinagar city demanding aid from the government.

Officials then said they would grant each transgender person a monthly allowance of 1,000 rupees ($14, €11.50) under an integrated social security scheme.

But Babloo said he never received any such allowance, despite lengthy visits to government officials, and gave up on the scheme.

"They made the process very cumbersome for us. The transgender community is not identified or acknowledged here. We went from office to office. We felt exhausted and gave up on it. We received more harassment than help," Babloo said.

A 22-year-old transman from Budgam, who asked not to be named, said he knew transgender people in his community suffering from illnesses or in need of therapy but could not gain access to health care during the lockdown period.

"People have 'normal' illnesses but they were not able to get the treatment and there was no aid for them," he told DW, adding: "We should be able to have rights."

Aijaz Ahmed Bund, who leads the Sonzal Welfare Trust, a local NGO which offers support to LGBT+ people, said, "The transgender community in the region has been left with no options and are on the verge of starvation."

"This is the third consecutive lockdown and it has put them in a dangerous situation. They are living alone, they are not able to afford rent as they have been abandoned by their families," he told DW.

"There is no acceptance for them in society. Their life starts with abuse, discrimination and violence and ends with that. There are people on hormone therapy who are not able to get it in the pandemic," he added.

Bund said there has been a steep increase in mental health problems among the community.

"There is a 200% increase in mental health issues like suicidal ideation, identity crisis, and lack of self-worth. We are getting about 200 cases a month. There has also been an increase in domestic violence," said Bund.

Bund said on June 2 he filed a public interest litigation (PIL) in court demanding that the community be provided with basic rations and access to health care, including to COVID-19 vaccines.

"LGBT people have experienced the COVID-19 pandemic differently than non-LGBT people in all aspects of basic needs," said Shreen Hamdani, a research scholar at the Central University of Kashmir who is working on a thesis about the region's transgender community.

"They are stigmatized due to their appearance and sexual preferences. They aren't even considered to get vaccinated," she said. "Their mental, economic and health conditions are at stake and prone to worsen due to ongoing pandemic."