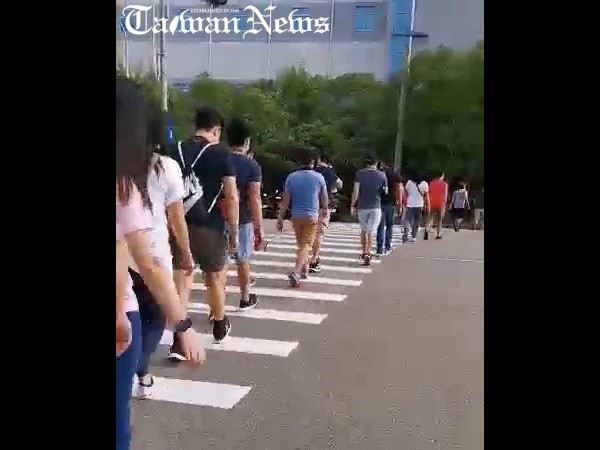 TAIPEI (Taiwan News) — A migrant worker has shared video footage showing how their factory now restricts the movements of foreign employees and herds them in groups as they go to and from work.

A series of COVID-19 cluster infections among migrant workers at four high-tech companies in Miaoli's Zhunan Science Park has surpassed 200 total cases. In response to the ongoing outbreak, the Miaoli County Government announced that effective Monday (June 7), all migrant workers are prohibited from venturing out of their residences unless absolutely necessary.

On Tuesday (June 8), police questioned 21 migrant workers who allegedly shirked the stay-at-home order. The Taiwan Association for Human Rights (TAHR) on Wednesday (June 9) condemned the lockdown as discriminatory and called for Miaoli to revoke it immediately.

A migrant worker who works at a tech firm in the park and wishes to remain anonymous has sent Taiwan News videos taken Wednesday (June 9) showing how workers are rounded up into large groups before being allowed to step outside. The worker said that after employees finished their shift, they were told to assemble in the factory lobby and wait for "the signal" to leave.

They were told they cannot leave the factory until all the workers from that shift had joined them, along with brokers and coordinators. The worker said that the broker agencies had provided buses to transport them to work that morning, but in the evening, they were told they would be heading back to their dormitories on foot.

The employee described the scene as resembling "kids following their leaders." The migrant complained the new system leads to more crowding in a confined space and wastes the workers' time as they stand idly by.

In the first video, taken at 8:30 p.m., workers can be seen leaving the building in single file while maintaining a social distance as they follow their "leader." Others can be seen standing by as they wait for their own unit leader.

The worker estimated that the whole process delays their departure from work by up to 20 minutes. The migrant staff member said the distance from the factory to the dormitory is about 500 to 600 meters.

The employee said the way migrant workers are being treated is unfair, as Taiwanese employees of the same plant are allowed to leave as they please on their scooters. As for the dorm rooms themselves, the worker said that most are shared by seven people piled into bunk beds. In this worker's case, there are actually nine in the room.

Thursday morning (June 10) at 6 a.m., the worker sent another video showing the staff walking to work in exactly the same fashion. In response to the new policy, the employee reported feeling a sense of culture shock and betrayal, "This is the only time I felt like one of those migrant workers whose basic rights were taken away."