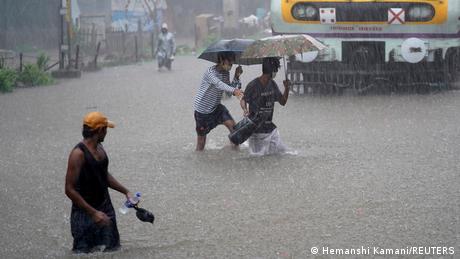 Monsoon rains caused a residential building to collapse in the Indian city of Mumbai late on Wednesday.

Authorities confirmed that at least 11 people, including eight children, were killed, and several others injured. Rescuers fear more people could still be trapped inside.

How did the building collapse?

The three-story building fell on top of another building in Mumbai’s northern suburb of Malad close to midnight.

Locals joined rescue workers in removing debris and securing survivors, who were taken to a hospital in the suburban Kandivali area.

Maharashtra minister Aslam Shaikh, who was at the site monitoring rescue operations, said the building collapsed due to rain, local media reported.

Incidents of building collapse have become a regular occurrence in parts of India during the monsoon season from June to September, as rains weaken the foundations of many poorly built structures.

In September 2020, a four-story building collapsed in Mumbai and killed 10 people.

How long is the monsoon expected to last?

The monsoon hit Mumbai on Wednesday. Heavy rains lashed down on the commercial and entertainment hub, flooding roads, rail tracks and several neighborhoods.

The India Meteorological Department has forecast "heavy to very heavy" rainfall in several parts of eastern and central India over the coming week.