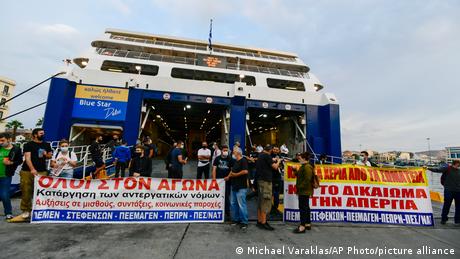 Large parts of Greece shut down on Thursday as workers across the country joined a general strike to protest a proposed labor reform.

The proposed reform — which is being voted on in the Greek parliament next week — has been slammed by unions and left-wing parties as an attack on the 8-hour workday.

Demonstrations are set to take place in the center of Athens, Thessaloniki and other cities.

What are the strikes protesting against?

Legislation, put forward by the ruling conservative New Democracy party, would make it possible for workers to work up to 10 hours in a day — getting time off later in compensation.

The bill would also increase the legal overtime limit to 150 hours a year and introduce a "digital work card" to monitor the hours worked, according to Kathimerini.

Labor Minister Kostis Hatzidakis and Prime Minister Kyriakos Mitsotakis have defended the proposed reform, saying that it protects workers. They plan to follow Italy and France in solidifying workers' rights to refuse or ignore work, including emails, on days off.

The major trade unions the General Confederation of Greek Workers (GSEE), the Civil Servants Confederation (ADEDY) and the All-Workers Militant Front (PAME), along with an array of other labor organizations called for the 24-hour strike.

The GSEE said in a statement that it had "strong disagreements regarding the controversial provisions of the labor reform," and that if it passes "it will be a huge blow to the workplace, to collective autonomy and to society."

Who is taking part in the general strike?

Public transport, with the exception of busses, is out of service all day in Athens, the daily Greek newspaper Kathimerini reported. Some airport workers also planned to stop working during the middle of the day.

Journalist unions also joined the strike. A statement on the website of the public broadcaster ERT said that it would join other news outlets and stop working between 5:30 p.m. local time (14:30 UTC) on Thursday 5:30 p.m. on Friday.

While hospitals would remain open, other public services such as municipalities and tax offices would close, ERT reported.

Ship workers from the Greek Seamen Federation (PNO) responded to an attempt by shipowners to have Thursday's strike classed as illegal by saying their "terrorist, extortionate methods" will be answered by a "mass, militant defense of the strike," ERT reported.