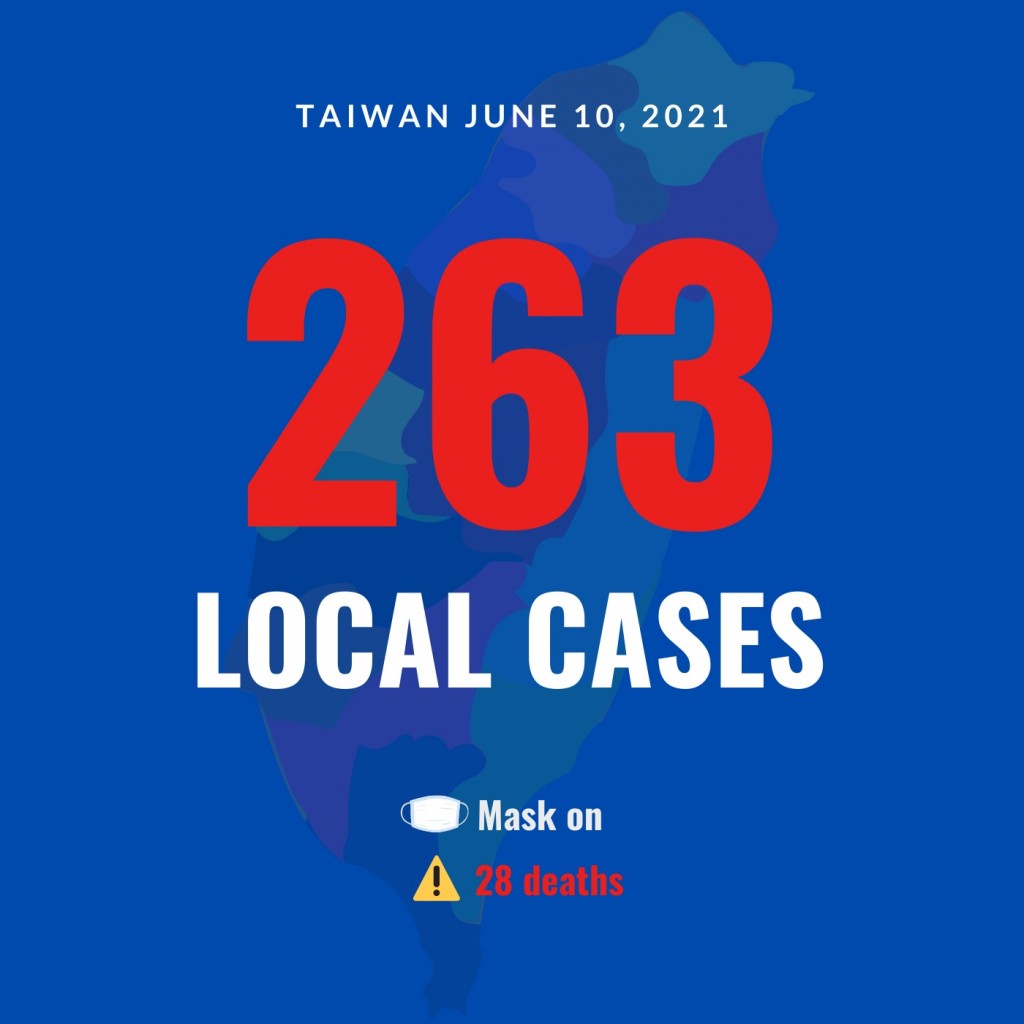 The latest local cases include 124 men and 139 women between the ages of five and 90, with the dates of symptom onset and testing ranging from May 22 to June 9. Of these cases, 112 were in New Taipei City; 58 in Taipei City; 43 in Miaoli County; 14 in Taoyuan City; 12 in Keelung City; 10 in Changhua County; seven in Hualien County; two cases each in Nantou County and Hsinchu County; and one case each in Yilan County, Taitung County, and Tainan City.

Chen said the 28 coronavirus-related deaths reported on Thursday include 21 men and seven women between the ages of 50 and 90. The dates of symptom onset and testing ranged from May 13 to June 8.

The dates of diagnosis ranged between May 16 and June 9, while the dates of death ranged from June 1 to June 9.

According to the CECC, case No. 12,214 is a Taiwanese man in his 30s who returned to Taiwan from India on June 7. Although he was asymptomatic, he underwent testing for the coronavirus when he entered a quarantine center and was diagnosed with COVID-19 on June 10.

Case No. 12,293 is a Taiwanese man in his 30s who returned to Taiwan from Nigeria on April 14 and has been asymptomatic since. As he was preparing to leave the country again, he underwent a self-paid coronavirus test on June 9 and tested positive for the disease on June 10.

The CECC stated that case No. 12,294 is a Taiwanese woman in her 40s who took her first dose of the Pfizer COVID-19 vaccine in the U.S. on April 9 and the second on April 30. She tested negative on a PCR test administered on June 3, three days before her flight.

When she returned to Taiwan, she went directly to her home to begin her quarantine. However, on June 7, she began to suffer symptoms of the virus, such as a cough and runny nose but did not seek medical treatment.

On June 9, a family member living with the woman developed a fever and was diagnosed with COVID-19 after undergoing a medical examination. Therefore, case No. 12,294 was listed as a contact and underwent a coronavirus test, which came back positive on June 10.

A total of 78 people have been removed as confirmed cases, while 14 cases are still under investigation. Up until now, 361 individuals have succumbed to the disease.