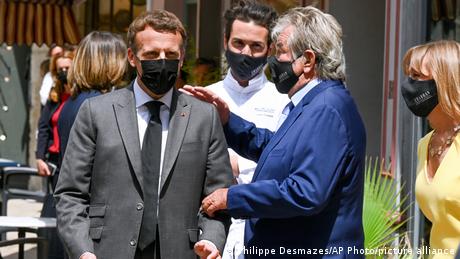 Police found a copy of Adolf Hitler's Mein Kampf and firearms at the home of one of the two men arrested after French President Emmanuel Macron was slapped in the face.

A suspect, identified only as Arthur C, was taken into custody on suspicion of having filmed the moment another man, Damien Tarel, allegedly hit Macron on Tuesday.

The incident took place as the president greeted a crowd in Tain L'Hermitage, a town in southeast France, as he tried to reconnect with voters ahead of next year's presidential election campaign.

Sources close to the investigation said that Tarel was subscribed to far-right channels on YouTube.

He remained under investigation in police custody on Wednesday and is expected to be charged with assaulting a public figure, which carries a maximum three-year prison term and a €45,000 (nearly $55,000) fine.

The book and weapons were reportedly found at the home of the man suspected of filming the assault on Macron.

Among the weapons said to have been recovered at his home are a sword, a dagger and a collector's rifle that was legally in his possession. It is not clear if the weapons were in working order.

Macron was attacked after approaching a crowd of onlookers during the visit, with his security detail intervening shortly afterwards.

His spokesman on Wednesday rejected French media reports that suggested the head of state had been warned by his security detail not to approach them.

"Clearly the president of the republic will continue having direct contact with the French people, just like the rest of the government," said Gabriel Attal.

What do we know about the two suspects?

The first man, suspected of slapping the president, is believed to have had an interest in a number of far-right and monarchist figures, as well as medieval French history.

On his Instagram page he describes himself as part of a national federation of historic European martial arts, alongside pictures of himself dressed in costumes from the Middle Ages and carrying a long sword.

But according to one friend, Loïc Dauriac, he is "apolitical" and the slap was completely out of character.

The suspect is also heard to shout "Montjoie et Saint-Denis! Down with Macronism".

Shortly before the incident, he stood alongside two other men during a TV interview, in which one of them says, "There are things you'd like to say to [Mr Macron] but unfortunately you can't... the decline of France."

The homes of both suspects were searched in a village to the north of Tain-l'Hermitage after Tuesday's attack.

The second suspect is reportedly also a fan of medieval swordsmanship.