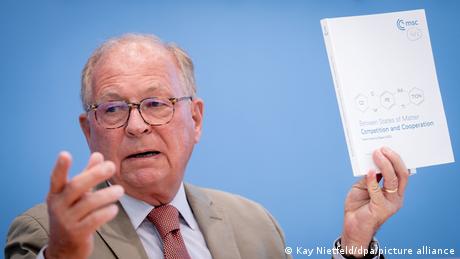 The European Union should develop a coherent policy on China so that it can help the West present a united front to Bejiing, Wolfgang Ischinger, the head of the Munich Security Conference, has told DW.

Ischinger said relations with China were at the heart of a new era of "competition and cooperation" described in the Munich Security Report 2021.

What was the advice to EU leaders?

Speaking after the release of the report, Ischinger drew a distinction between the US approach to China, and that of the EU.

"We know that the United States has a China policy," said Ischinger. "They know what they want to achieve with China... Does the European Union speak with one voice on China? Can our partner in Washington define what is the EU position on China? Not really so far."

Ischinger urged European leaders to define areas where they can agree on policy towards China, and then coordinate with the United States on a common strategy.

Such issues, he said, could range "from artificial intelligence to military to Hong Kong to human rights, to trade to Huawei and 5G and cyber interference and hacking."

In some cases, he said, greater cooperation with China was needed while, in others, a policy ensuring the West could compete with it was more desirable.

"We need to figure out the proper way of balancing between areas of cooperation and areas of pushback," he said. Areas such as climate change and arms control were highlighted as fields where continued cooperation with Beijing was essential.

But at the same time, said Ischinger, the West needed to compete on the highest level.

"Power in the 21st century means competing in high technology, competing in artificial intelligence, competing in the power over data. Who controls data will be controlling the world."

The interview was conducted by Richard Walker