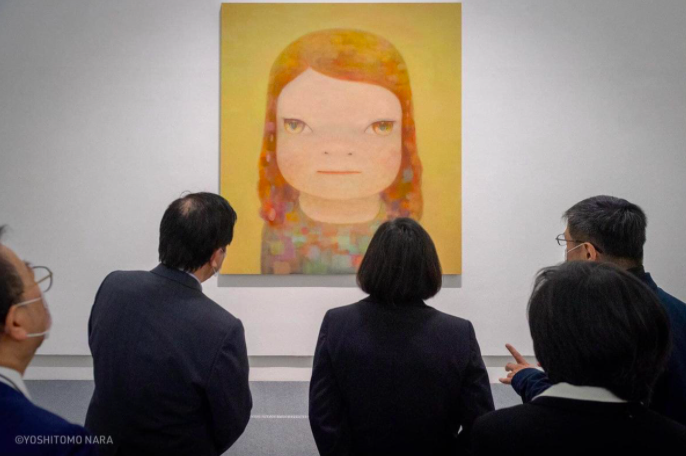 As Taiwan’s Level 3 alert has been extended until June 28, Nara's show abruptly closed down on Tuesday (June 8). The show was originally slated to run from March 12 to June 20 at the Kuandu Museum of Fine Arts in Taipei.

This year marks the 10th anniversary of the earthquake and tsunami that ravaged Tohoku and the closer Taiwan-Japan ties that emerged in the years since. To mark the occasion, the artist even flew to Taiwan to set up the event.

The exhibition features Nara's two-meter-long painting “Miss Moonlight,” which has a permanent home at the Mori Art Museum in Tokyo, in addition to his latest drawing “Hazy Humid Day,” with a version made just for the exhibition in Taiwan, according to the General Association of Chinese Culture (GACC). A large-scale installation and other artworks could also be seen at the venue.

The GACC, which organized the show, announced the cancellation on Facebook on Tuesday, and many of Nara's fans expressed their disappointment.

However, it was announced Wednesday in a press release that the show will continue on to southern Taiwan as scheduled. It will head to Kaohsiung Museum of Fine Arts in July, followed by the Tainan Art Museum in November, according to the original plan.

The association stated that over 40,000 people have visited the Taipei show, including President Tsai Ing-wen (蔡英文), Minister of Culture Lee Yung-te (李永得), and Japanese representative in Taiwan Izumi Hiroyasu (泉裕泰). All appeared at a press conference for a sneak peek of the show in March.