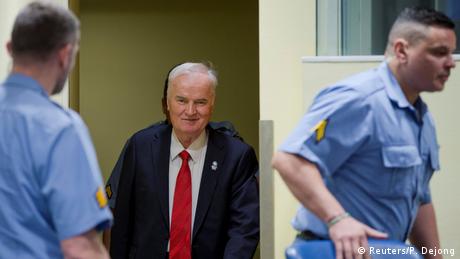 The judges found the accused guilty of the Srebrenica genocide in the summer of 1995, and convicted Mladic of persecuting Bosniaks and Croats throughout Bosnia and Herzegovina and terrorizing the civilian population of Sarajevo, the Bosnian capital besieged during the 1992-95 war.

Between April 1992 and July 1995, the Bosnian Serb army under his command attacked, looted and destroyed towns and villages in Bosnia. About 100,000 people were killed, and there were systematic expulsions of the non-Serb population and mass rapes of non-Serb women. Mladic was also charged with taking members of the United Nations peacekeeping forces (UNPROFOR) hostage.

In 2017, the tribunal found Mladic guilty on 10 of the 11 charges, acquitting him of the charge of genocide in six Bosnian municipalities in 1992. The judge's ruling was the Hague tribunal's last first-instance verdict — the appeal ruling due on June 8, four years later, will be the first ruling of its successor institution, the International Residual Mechanism for Criminal Tribunals (IRMTC).

Four years ago, Mladic's defense and the prosecution both appealed the verdict. His lawyers demand an acquittal, arguing the general's guilt was not proven; the prosecutors argued the first-instance panel was wrong to acquit Mladic of the charge of genocide in the six municipalities.

"Shoot only human flesh! Only at human flesh! They have nothing, they just have a few simple rifles, that's all" — this was Mladic's order radioed to his troops when they stormed the UN-declared safe area in Srebrenica in July 1995. And the troops obeyed: 30,000 Bosniaks were driven out of their homes in a few days before the eyes of the Dutch Blue Helmet soldiers, about 8,000 boys and men were executed and buried in mass graves. Srebrenica was the biggest massacre in Europe since World War II.

At the height of his career, General Ratko Mladic was an ardent nationalist who saw himself as an avenger of Serbs for centuries of Turkish rule in southeastern Europe. The international media dubbed him the "butcher of Bosnia."

Mladic began his career as a stalwart communist. Born in eastern Bosnia in 1943, he was two years old when his father, one of Tito's partisans, was killed by fascist Croat militias. Mladic attended the Yugoslav Military Academy in Belgrade in the 1950s, graduating at the top of his class. As an honor, the young man received a Yugoslav Zastava pistol. At that time he said he would only ever fire it to celebrate the birth of his grandchildren.

At the start of the Croatian war in June 1991, when many Serbs in Croatia rebelled against Croatian independence, Mladic was a colonel in the Yugoslav army. He was made commander of the 9th Corps in Knin near the border with Bosnia, his job was to organize Serb militias and support them in the fight against Croatian independence. Under his command, the cities of Sibenik and Zadar were bombed and the Croatian population was expelled from many towns in Croatia.

… and Bosnia and Herzegovina

In May 1992, Mladic, now a general, was transferred to Bosnia and Herzegovina. He commanded Serb forces and fought to create a land link between the areas his soldiers had conquered in the east and west of the country. Mladic ordered the siege of and bomb attacks on Sarajevo.

In public, he made sure to say only military targets should be attacked. A radio message with explosions in the background intercepted at the time revealed what he told his men: "You are to keep the buildings of the presidency and the parliament under fire [...] there are not many Serbs there. We will destroy [the Bosniaks]."

Many international observers felt that the general, who allegedly said "borders are always drawn with blood and states are drawn with graves," embodied the Serbs' disregard for the West.

Although officially subordinate to the political leader of the Bosnian Serbs, Radovan Karadzic, Ratko Mladic was never just a soldier; he had considerable political influence within the Bosnian Serb leadership. Reportedly, he persuaded the Bosnian Serb parliament to reject the 1993 peace plan presented by international mediators David Owen and Cyrus Vance.

On July 25, 1995, before the Dayton Peace Accords were signed, Mladic and Karadzic were indicted at the International Criminal Tribunal for the former Yugoslavia in The Hague for crimes committed in Bosnia and Herzegovina. A year later, the new president of Republika Srpska, Biljana Plavsic, dismissed Mladic as chief of general staff. Mladic went into hiding, apparently with the support of politicians in neighboring Serbia and the Serbian army. Confident of protection, he was spotted several times in restaurants and soccer stadiums.

In May 2011, Mladic was finally arrested in Serbia — international pressure on the government in Belgrade had become too great. The trial of the "butcher of Bosnia" lasted 523 days, with almost 600 witnesses taking the stand.

Mladic has always maintained his innocence, calling the charges "loathsome" and the UN special tribunal "satanic." The prosecution demanded life imprisonment, the defense an acquittal.

While still on the run, Mladic said he always carried a poison pill with him — he was not going to be caught alive. He never swallowed that pill, and even survived three strokes in prison.

His daughter, on the other hand, committed suicide in 1994, before the end of the war — supposedly because she could not bear the crimes her father was accused of in Croatia and Bosnia and Herzegovina. She shot herself in the head with the very Zastava pistol her father once received from the Yugoslav military academy as the best cadet of his year.