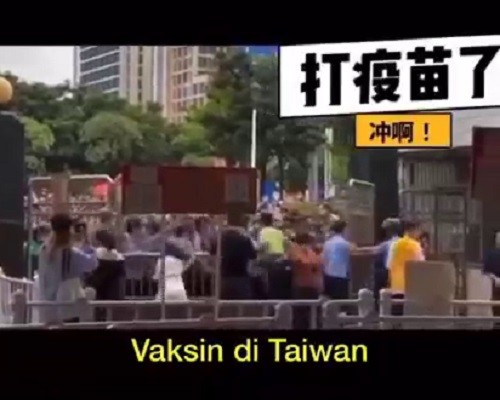 TAIPEI (Taiwan News) — A Malaysian politician on Monday (June 7) uploaded a video purporting to show panicked mobs of people clambering to get vaccinated in Taiwan, but it was actually footage shot in China.

On his Facebook page on Monday, Annuar Musa, Malaysia's Minister of Federal Territories, uploaded a video labeled in Malay "Vaksin di Taiwan," meaning "vaccine in Taiwan." At the top of the post, Annuar cryptically wrote "just a reflection... don't insult your own country."

The video displays Chinese characters reading "getting vaccinated" (打疫苗了), and the first sign it's from China are the simplified characters 冲啊, meaning "rush!"

At the beginning of the video, officials can be seen opening metal gates as swarms of people rush forward. Another shot shows people sprinting from a building with palm trees in the background, indicating a tropical climate.

The next shot shows a sidewalk completely filled with people pushing and shoving as they plow forward. One of the shops has a sign printed with the simplified characters 经典, meaning "classic," over the entrance. At the 1:01 mark, a huge throng of people can be seen funneling into the tiny entrance to a hospital that has a sign reading "vaccination clinic" (预防接种门诊) in simplified characters. Another scene shows a fight breaking out between at least two women.

The video then cuts to a long line of police clad in black Chinese uniforms, as opposed to the navy blue worn in Taiwan. In the next scene, a massive crowd has congregated in front of building with a sign that reads "Dali Town Nanhai District Novel Coronavirus Vaccination Center" (南海区大沥镇 新冠疫苗接种中心).

The last three scenes show more pushing and shoving with people clearly speaking Mandarin with an accent associated with people living in China.

Based on the evidence in the video, the footage appears to have been shot in Foshan City's Nanhai District, which is located in Guangdong Province, not Taiwan. A Malaysian reader who wished to remain anonymous told Taiwan News that Annuar had posted the video to deflect criticism about its own handling of the coronavirus vaccine rollout by making it seem worse in Taiwan. Annuar has yet to respond to Taiwan News' request for comment.