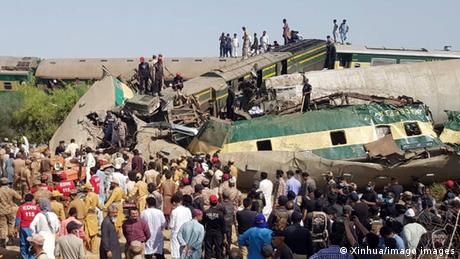 The accident occurred in Ghotki district, in Sindh province.

The Sir Syed Express train crashed into the Millat express, which had derailed. It wasn't clear what caused the derailment and subsequent crash. About 1,100 passengers were aboard the trains.

Police officer Usman Abdullah told AP news agency that police and rescue officials, along with villagers, were transporting the dead and injured passengers to nearby hospitals. Locals were also helping pull out bodies and injured people from the wreckage.

"Right now the challenge for us is to quickly rescue those passengers who are still trapped in the wreckage," said Abdullah.

Around 15-20 passengers are still trapped, said authorities. TV channels showed injured passengers being transported in ambulances. Pakistani media reported that heavy machinery to free trapped people was not available at the site for hours after the crash. Mobile phone footage shown on media depicted several green carriages lying on their side.

Authorities said troops had also arrived to help out with rescue operations. A local told Pakistani channel Geo News that at least 100 were injured, and he had counted at least 30 bodies during rescue work.

A train traveling between Karachi and Rawalpindi caught fire in 2019, killing dozens. A train collision in Karachi had killed 21 passengers in 2016. Pakistan witnesses frequent train accidents, as little attention has been paid to the maintenance and upkeep of railway tracks and signal systems in recent years.