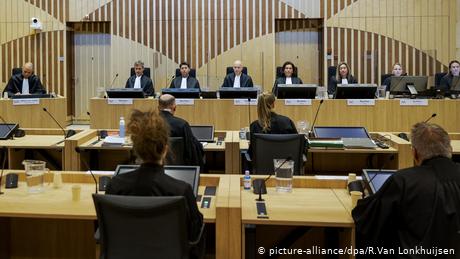 The trial of four individuals suspected of being involved in the downing of the Malaysian Airlines flight MH17 over Ukraine in 2014 is set to start on Monday in the Netherlands.

The court is in a high-security location near Schiphol airport in the Netherlands due to the large number of Dutch victims from the incident.

"The court will open the MH17 criminal trial proper and, through examining and discussing the content of the prosecution file, elucidate the key questions which it has already begun to address," the court said in a statement.

Court proceedings officially began in March 2020 with discussions over the admissibility of evidence.

What will this trial phase involve?

The trial will start with hearings looking at the evidence and the investigation into the crash. Defense and prosecution will then have time to discuss any issues, lasting until July 9.

After that relatives of the victims will be allowed to address the court at some point in September.

"On the one hand we want to know exactly what happened, why it happened and who was responsible, but the price you pay for that is that there is also information released that could be shocking," Piet Ploeg, a spokesman for the relatives, told Reuters. Ploeg's brother and his family died in the crash.

Who is on trial?

Three Russian nationals, Oleg Pulatov, Igor Girkin and Sergei Dubinsky, and one Ukrainian citizen, Leonid Kharchenko, are being tried in absentia for the crime of downing MH17.

Pulatov is the only one represented in the proceedings, but denies involvement. The other three do not have lawyers appointed to them.

What happened in the downing of MH17?

The Boeing 777 jet was en route from Amsterdam's Schiphol airport to Kuala Lumpur in Malaysia. It was shot down as it flew over a part of eastern Ukraine that is under the control of pro-Russian rebels.

Investigations showed that the BUK missile that downed the plane originally belonged to the 53rd Anti-Aircraft Missile Brigade of the Russian Army based in the city of Kursk.