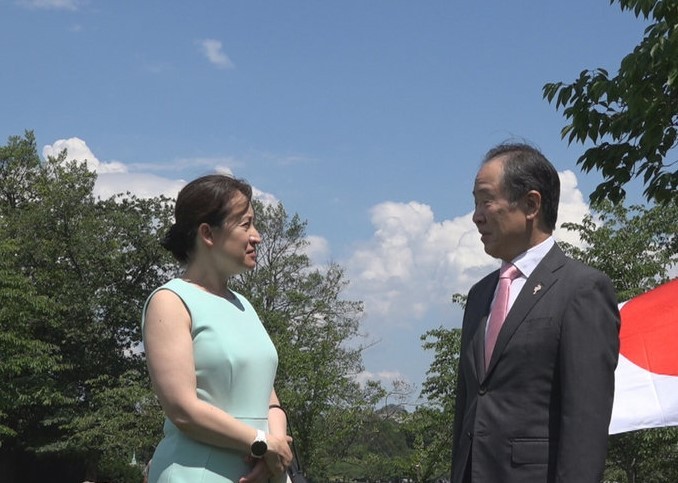 Speaking to Ambassador Hiroshi during a stone lantern lighting ceremony at the Japanese embassy, Hsiao expressed gratitude towards Japan for lending a hand as Taiwan experiences a spike in COVID-19 cases. She said Japan’s donation demonstrates the solid partnership between the two countries, which share the values of democracy and freedom, CNA reported.

In his opening remarks at the ceremony, Hiroshi mentioned Hsiao and said he believes Japan and Taiwan will gain more support and respect from the international community through their actions during the pandemic.

During an online vaccine summit on Wednesday (June 2), Japanese Prime Minister Suga Yoshihide announced that his government plans to donate 30 million surplus vaccine doses to other countries and regions. Given the surge in cases in Taiwan since mid-May, Japan's government decided to send a shipment of 1.24 million vaccines to the country, which arrived Friday.

Japanese Foreign Minister Motegi Toshimitsu told reporters on Friday that Japan was responding to a Taiwanese request and that the donation reflects “Japan’s important partnership and friendship with Taiwan.”

In the days leading up to the donation, Beijing criticized the move as a “political show.” During a press conference on May 31, Chinese Foreign Ministry Spokesperson Wang Wenbin (汪文斌) alleged Japan's generous act "has been met with suspicion by many in the Taiwan media and general public, as well as the outside world," without listing any examples. Wang said, "vaccine aid should return to the original intention of saving lives and should not be reduced to a tool for political self-interest."