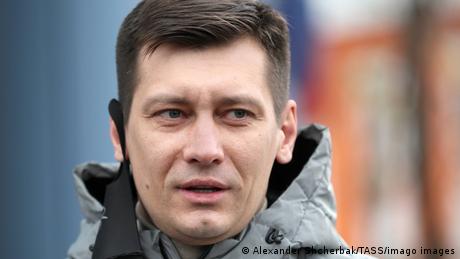 Gudkov, who had announced earlier this year plans to run for parliament, was held in police custody for two days last week in a criminal investigation.

His detention came as the opposition accuses authorities of a crackdown on dissent ahead of September's parliamentary elections, accusations the Kremlin has rejected.

"I am approaching Kiev," Gudkov, 41, said in a Facebook post, adding that he would have to remain abroad at least until the vote.

"My decision has been supported by my relatives and loved ones who have also received serious information about threats and risks," Gudkov said.

"Several sources close to the presidential administration circle said that if I do not leave the country, my fake criminal case would be taken further to the point of my arrest," Gudkov said.

The Kremlin critic was detained at his country house last week over allegations that he failed to pay a debt on a rented property, which he denies.

He was released without charges Thursday. However, Gudkov remains a suspect.

Gudkov, who was a parliament member in 2011-16, said the investigation was to prevent him from running for parliament this year.

His arrest earlier this week came just a day after another prominent Kremlin critic, Andrei Pivovarov, was pulled off a Warsaw-bound plane in Saint Petersburg minutes before takeoff.

Russian authorities have increasingly cracked down on dissent in the lead-up to September's parliamentary elections as the main Kremlin-backed party, United Russia, sees a fall in popularity.

But the Kremlin insists that recent arrests of politicians have nothing to do with politics and denies trying to clear the field of political opponents.