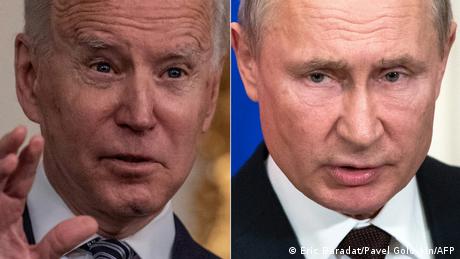 The US will stand with European allies against Russia, President Joe Biden said ahead of his meeting with Russian President Vladimir Putin.

"We are standing united to address Russia’s challenges to European security, starting with its aggression in Ukraine," Biden wrote in an op-ed for the Washington Post published on Saturday.

Biden said he has been "clear and direct" in previous phone calls with Putin.

"The United States does not seek conflict. We want a stable and predictable relationship where we can work with Russia on issues like strategic stability and arms control," he wrote. However, he added: "Putin knows that I will not hesitate to respond to future harmful activities."

Biden is scheduled to head to Europe on Wednesday for both the G7 and NATO summits. He is then expected to meet Putin face-to-face in Geneva on June 16.

Biden on China and Russia

Biden said his trip to Europe "is about realizing America’s renewed commitment" to allies and to "deter the threats of this new age."

He added that the US "must lead the world from a position of strength," whether it is ending the COVID-19 pandemic worldwide or addressing climate change.

But the US president notably used the op-ed to highlight what he called "challenges" imposed by China and Russia.

Biden said Washington would play a global role in "confronting the harmful activities of the governments of China and Russia."

"We will focus on ensuring that market democracies, not China or anyone else, write the 21st-century rules around trade and technology," he said, adding that world democracies should work together to expose and counter "ransomware attacks," "cyberattacks" and "invasive AI-driven surveillance."

Since assuming office in January, Biden has ramped up pressure on Russia, slamming the Kremlin for repeated human rights abuses.

NATO Secretary General Jens Stoltenberg on Sunday warned Russia and Belarus against threatening the alliance, following the forced landing of a Ryanair commercial flight between Athens and Vilnius in Minsk.

The former Soviet republic has escalated repression against independent journalists and peaceful protesters in the past five months.

However, Biden did not comment on Belarus in the op-ed.