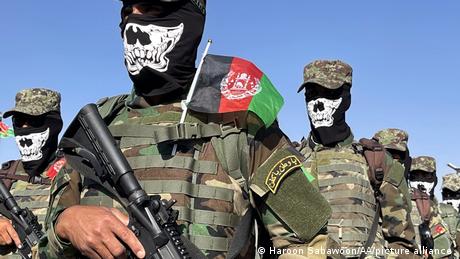 Afghanistan experienced a weekend of carnage as scores died in a series of Taliban attacks across the country , according to local officials. There was also one incident of alleged friendly fire reported on an air base in the north.

Qaysar district in northern Faryab province is on the verge of falling to the Taliban Sunday, news agencies reported.

Heavy clashes were reported in the center of the district and the village of Kohi, the last remaining areas still controlled by the government.

Three officials told dpa the Taliban were able to capture both the police headquarters and the municipality building one kilometer (0.6 miles) from the center of the district.

The violence was initiated by a car bomb that detonated outside district police headquarters the day before.

At least 20 additional security forces personnel were captured in the attack, which was followed by heavy clashes. An additional 18 were wounded.

Saturday: a district is captured, land mine kills 11

Saidullah Nuristani, the provincial counselor or Nuristan to the east of the capital Kabul, reported government forces had abandoned the Doab district to the Taliban Saturday following 20 days of resistance.

The Taliban blocked the supply routes into Doab, forcing the government to evacuate in a deal mediated by tribal elders.

Ismail Ateekan, a member of parliament representing the province, told dpa that without food and ammunition, the Afghan security forces had no choice but to flee. They were not met with resistance when they did.

Doab was the third district to fall to the Taliban since Thursday night. Two districts in southern Zabul and Uruzgan provinces fell late on Friday.

Also on Saturday, 11 civilians including three children were killed when the vehicle they were traveling in struck a landmine in the northern province of Bagdis.

The governor of the province, Husamudim Shams, blamed the Taliban for the attack on the vehicle as it was en route to the city of Qala-e-Naw. The Taliban did not immediately claim responsibility for the incident.

The attack occurred hours ahead of a scheduled meeting between senior Taliban leaders and UN officials in Qatar to discuss the so-called peace process and security for diplomats and aid workers.

Friday night, the Taliban killed at least six policemen including two police commanders in the northern Baghlan province, according to provincial police spokesman Ahmad Javid Basharat. Several others were wounded in the offensive launched on Julga district at midnight, a provincial counsilor, Firuzuddin Aimaq, said.

Also in the north Friday, 13 pro-government fighters, including a key commander, were killed by the Afghan air force as they returned to a base in the Kohistan district of Badakhshan province following an operation against the Taliban. Several others were wounded.

A member of parliament, Zabihullah Atiq, said the incident that killed Commander Ashur was a mistake. Atiq said one victim later succumbed to his wounds while another victim of the airstrike remains in critical condition.

What is the security situation across Afghanistan?

The Taliban has intensified its attacks on provincial capitals, districts, bases and checkpoints across Afghanistan. Rahmatullah Andar, a spokesman for the national security council in Afghanistan, told dpa the Taliban have carried out 1,455 attacks since international forces began to withdraw.

Rohullah Ahmadzai, a spokesman for the Afghan Defense Ministry, sought to downplay the Taliban's conquests. He said military plans are being made to neutralize the Taliban.

Since the US and NATO officially withdrew from Afghanistan on May 1, seven districts have fallen to the Taliban.

International forces are set to completely withdraw from Afghanistan by September 11.

In April, the UN said almost 1,800 Afghan civilians were either killed or wounded in the fighting between government forces and the Taliban between January and March of 2021.

Tens of thousands of Afghans have been displaced by the fighting in recent weeks.

The "Islamic State" (IS) armed group is also active in Afghanistan.