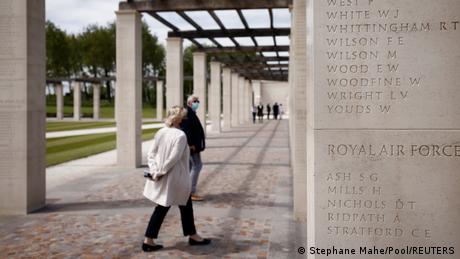 A memorial to 22,500 British-led fallen was unveiled Sunday at the Normandy hillside village of Ver-sur-Mer, overlooking what on D-Day in 1944 was code-named Gold Beach.

The Allied landing of 156,000 Allied troops, carried on 7,000 boats and called Operation Overlord, led to the liberation of occupied Western Europe and Nazi Germany's surrender a year later as the Soviet Red Army approached Berlin from the east.

In a videoed message, Britain's Prince Charles described the memorial's unveiling as "long overdue" in remembering "extraordinary selflessness and resolve."

She described June 6, 1944, as a "lightning bolt of freedom"… in the heart of the [then] mist that enveloped the Normandy Coast."

Inscribed on 160 white stone columns, arrayed like a British flag at Ver-sur-Mer, are the names of 22,442 servicemen and women, mostly British, who fell between D-Day, June 6 and August 31, 1944.

They also include soldiers then under British command of over three dozen nationalities from across the Commonwealth and French resistance fighters.

The Ver-sur-Mer site also includes a French Memorial, dedicated to some 20,000 French civilians killed across Normandy during aerial bombings and ground battles.

Previously, key sites to pay respects were for Brits a nearby cemetery in Bayeux town and the American cemetery at Colleville-sur-Mer, overlooking Omaha Beach.

War heroes absent due to COVID

Local Normandy residents did, however, visit the monuments over the weekend.

So too did history enthusiasts and a few visitors from neighboring European countries seen touring small roads in jeeps and military vehicles.

But largely absent were American and Canadian tourists who in past years have flocked to Normandy.

Freelance tour guide Sylvain Kast, who normally works full-time over summer guiding visitors, said he only had three bookings between June and October.

"You do this job for the love of it," said Kast, a standby history teacher, who's also worked nightshifts welding during the pandemic. "It's been tough psychologically."

Across Normandy are more than 20 military cemeteries holding the remains of Americans, British, Canadian, French, German and Polish troops who died in the 1944 battle that saw Allied troops reach Germany in the winter of early 1945.

The D-Day landings on five Normandy beaches — also code-named Utah, Juno and Sword — still ranks as one of the world's biggest ever naval operations.