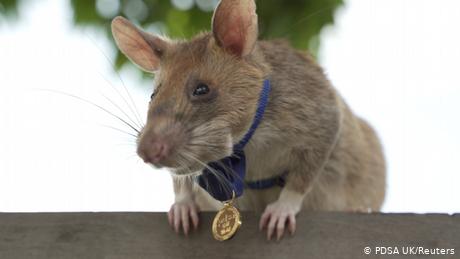 A giant African pouched rat who spent years detecting land mines in Cambodia's countryside has come to the end of his working days.

Magawa, originally from Tanzania, has been the most successful rodent to be trained and overseen by a Belgian nonprofit, APOPO, to sniff out landmines and alert de-miners so they can safely remove explosives.

"The best thing to do is to retire him."

APOPO said earlier that the 7-year-old was still in good health. However, it added: "He has reached a retirement age and is clearly starting to slow down."

The average life span of a giant African pouched rat is eight years.

In September, the UK veterinary charity PDSA awarded Magawa its gold medal for "life-saving devotion to duty, in the location and clearance of deadly land mines in Cambodia."

He is the first rat ever to win a bravery award, an honor that had previously been exclusively reserved for dogs.

The size of African giant pouched rats allows them to walk across mine fields without triggering the explosives — and much faster than a human with a metal detector.

Rodents are taught to detect a chemical compound within the explosives and to ignore scrap metal.

APOPO said 20 newly trained rodents recently arrived in Cambodia had received their accreditation from the authorities to start land mine detection.

Leftover mines are a legacy of Cambodia's brutal civil war in the 1970s and 1980s.

Up to 6 million remain undiscovered, according to data from the Cambodian Mine Action Center (CMAC).