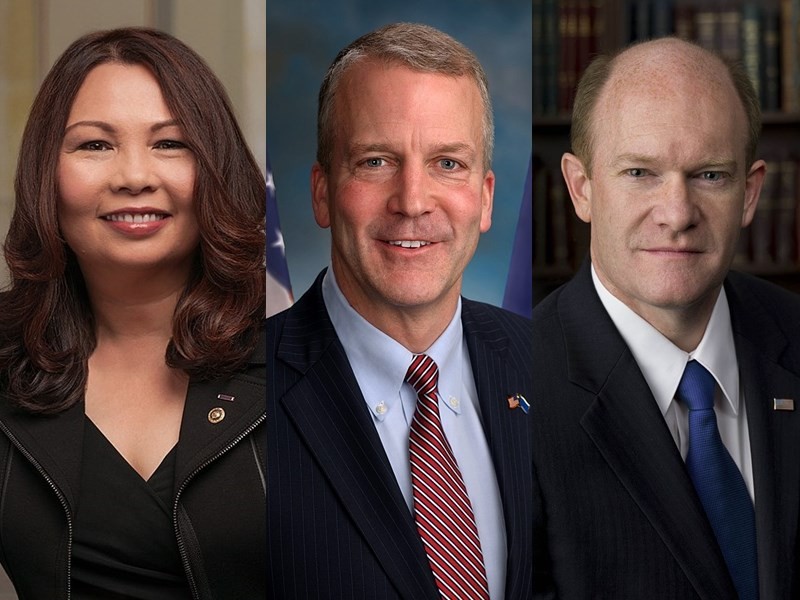 Illinois Democrat Tammy Duckworth is a war veteran of Thai ancestry who served as a helicopter pilot in Iraq, where she lost both her legs. Alaska Republican Dan Sullivan served as assistant secretary of state under President George W. Bush, while Delaware Democrat Christopher Coons will be the only visitor serving on the Senate Foreign Relations Committee.

According to the AIT statement, the senators will meet Taiwanese leaders “to discuss U.S.-Taiwan relations, regional security, and other significant issues of mutual interest.” Their stay on the island forms part of a wider trip through the Indo-Pacific region, AIT added.

The Ministry of Foreign Affairs (MOFA) pointed out that the bipartisan visit’s inclusion of Taiwan in the Senate Armed Forces Committee’s first international trip since the start of the COVID-19 pandemic indicated its support for the island, CNA reported.

As a result of COVID-19 precautionary measures, President Tsai Ing-wen (蔡英文) was going to meet the three senators at a command center in the military part of Taipei Songshan Airport at 8:30 a.m., another CNA report said.