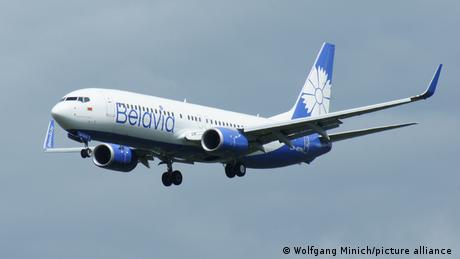 The EU agreed Friday to ban Belarus-flagged carriers from the airspace and airports of the 27-nation bloc and will not permit EU airlines to fly over Belarus.

The new civilian aviation ban is to sanction Belarus for diverting to Minsk a Ryanair flight that was traveling from Athens to Vilnius in order to arrest a prominent dissident blogger, Raman Pratasevich, and his girlfriend, Sofia Sepaga.

An EU statement noted the extent of the ban on Belarusian aviation, requiring member countries "to deny permission to land in, take off from or overfly their territories," and is set to come into effect at midnight Central European Time on Friday. Saturday is the first day the ban will be applied.

EU ministers agreed last month to sanction the Belarus aviation sector over the May 23 incident.

How have civil aviation bodies responded to the new rules?

The European Union Aviation Safety Administration (EASA) said in a statement that while it understands the additional cost and effort to airlines, the ban is needed "to reduce the potential risk to passengers and crews that could arise from operations in this airspace."

However, International Air Transport Association (IATA) chief Willie Walsh was critical of both Minsk and the EU for politicizing civilian air travel. IATA members include 290 airlines which account for more than four-fifths of air traffic internationally.

"Two wrongs do not make a right," Walsh said, adding, "Politics should never interfere with the safe operation of aircraft and politicians should never use aviation safety as a cover to pursue political or diplomatic agendas."

What further sanctions against Belarus are expected?

EU diplomats are at work on an expanded blacklist.

The new list is expected to include about 10 officials involved in diverting the airplane as well as dozens of others involved in the violent suppression of civil society since disputed elections last August.

Key industries in Belarus such as fertilizer production will be targeted, as will Belarusian access to the bond market in Europe. The broader sanctions package could come into effect later this month.

The EU has already hit 88 Belarusian officials with visa bans and asset freezes, including President Alexander Lukashenko who proclaimed himself the winner of the August presidential election, widely considered to be mired by fraud and deemed unfree by the international community.

Belarus faced further widespread condemnation from the international community Friday after state television aired a lengthy coerced confession by dissident journalist Raman Pratasevich on Wednesday evening where he was speaking under clear signs of duress.