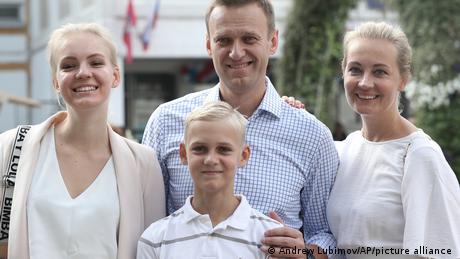 In an Instagram post, Navalny thanked his family and supporters at the end of a year in which he described "strange things" happening to him. His wife, Yulia, shared a picture of the two of them in better times with "happy birthday" and a heart emoji in the caption.

What 'strange things' happened to Navalny in the last year?

Navalny survived a poisoning by the chemical nerve agent Novichok on a flight from the eastern Russian city of Tomsk to Moscow in August.

He was then flown to Germany for treatment. On January 17 this year, he returned to Moscow and was taken into custody upon arrival at the airport.

A Moscow court then sentenced him to several years in a penal colony. He is currently serving time in Vladimir, 100 kilometers (62 miles) east of Moscow.

What lessons has Navalny taken from this last year of his life?

"I hope I can say today that the achievement of the year is that I'm kind of staying away from the 'beast in a cage' state for now," he wrote. "Thank you all, I hug everyone."

How is the Russian government marking the occasion?

Russian President Vladimir Putin signed into law a prohibition on leaders of so-called extremist organizations from running for office and participating in other ways, such as by donating or consulting, Russian outlet Mediazona reported.

dpa contributed to this report