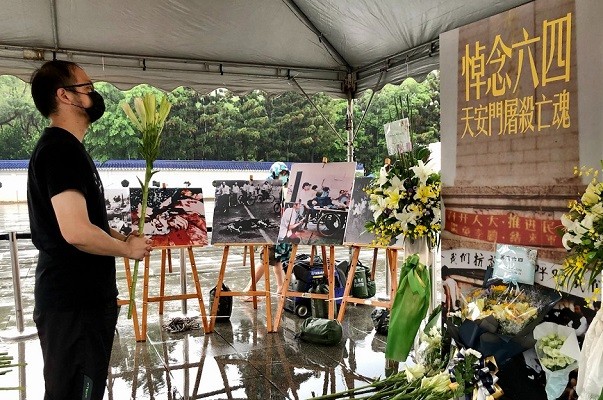 TAIPEI (Taiwan News) — Taiwanese marked the 32nd anniversary of the Tiananmen Square Massacre Friday (June 4), and as a precaution against the nation's raging COVID outbreak, this year's vigil was moved online, with a scaled-down memorial pavilion set up in central Taipei.

The event, held annually to commemorate the killing of hundreds to thousands of pro-democracy demonstrators in Beijing, was organized by the NGO New School for Democracy (NSD) in conjunction with the Taiwan Human Rights Promotion Association, the Civil Judicial Reform Foundation, the Taiwan Christian Church, and many other organizations.

A pavilion was erected on the capital's Liberty Square to accommodate mourners from 4 to 8 p.m. Epidemic prevention measures were enforced, with only one person at a time permitted to enter and place flowers in the canvas-covered space surrounded by photos of the June 4, 1989 tragedy.

The solemn atmosphere was disrupted at 8 p.m., however, when a man vandalized the display, CNA reported. After toppling over and damaging one of the easels holding a photo, police arrested the 40-year-old man and took him to Renai Road Police Station for questioning.

President Tsai Ing-wen (蔡英文) took to Twitter to say the Taiwanese people would "never forget" those who sacrificed themselves for freedom and democracy, adding "Every year, we join our friends in Hong Kong & around the world in commemorating their sacrifices." This year's memorial took on a special significance, as Taiwan became the only country in the Sinophone world to host a memorial of the massacre in the wake of increased repression in Hong Kong.

Every year, China's government beefs up its security presence ahead of the day, and censors purge any reference to the incident from Chinese social media. While a vigil illegally organized in Hong Kong's Victoria Park last year proceeded without significant interference from police, several participants, including democracy advocate Joshua Wong (黃之鋒), were later sentenced to prison terms ranging from four to 10 months.

The Hong Kong authorities have been trying to stamp out public remembrance of the massacre for the second consecutive year, conducting stop-and-search patrols and forcing residents to improvise or observe the day in private.

Officials earlier this week also suddenly forced the June 4th Museum to temporarily close, citing a lack of a public entertainment license. In addition to educating the public about the massacre, the museum had previously organized the Victoria Park memorial, which drew tens of thousands each year.

NSD President Tseng Chien-yuan (曾建元) told Taiwan News that Taiwanese must realize their important role in protecting universal values from the encroachment of authoritarianism, as their country stands on the frontlines of China’s expansion. He quoted Czech writer Milan Kundera: "The struggle of man against power is the struggle of memory against forgetting."