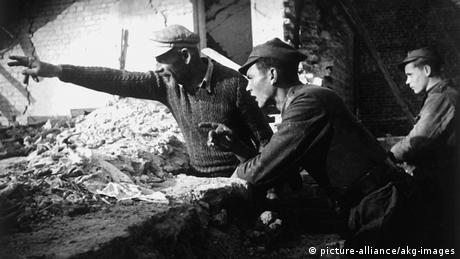 Belarus first began to put members of the country's ethnic Polish minority under pressure and arrested leading representatives at the beginning of this year. Now the country's prosecutors are turning their attention to the resistance fighters of the Polish Home Army (AK). Belarusian Attorney General Andrei Schwed has called the fighters who took on the German occupying forces during the Second World War "fascist criminals."

There cannot be many former members of the Polish Home Army still around to hear the Belarusian authorities' claim. One of them is 90-year-old Veronika Sebastianowicz, a member of the Association of the Soldiers of the Home Army in Belarus. She was just 13 when she joined the AK. She was arrested and tortured six years after the end of World War Two, but she survived deportation to a Soviet gulag. She told the daily Polish newspaper Rzeczpospolita that she preferred not to comment on what the attorney general had said, but stressed that she was not afraid.

On April 9, the Belarusian authorities opened a criminal case against former AK members, accusing them of committing "genocide against the Belarusian people" during the Second World War. In mid-May, Schwed spoke about the first results on the state TV channel, Belarus 1. He said he had information about surviving "Nazi criminals" and that they were primarily members of "Lithuanian SS battalions and the Polish Home Army." Schwed announced that he was making the relevant requests for judicial assistance from Poland.

The AK was a volunteer army that was formed from resistance cells in German-occupied Poland. Hundreds of thousands joined the movement set up in 1942, three years after the country was invaded.

Since the collapse of communism, the Home Army has been officially celebrated in Poland, and Minsk's Nazi comparisons have sparked outrage. The Polish Foreign Ministry says Warsaw has asked the Belarusian government to clarify whether the attorney general's words represent the leadership's "official line" or were intended as a PR stunt. Poland is concerned about the clear rise in tensions in bilateral relations, it says.

A war of disinformation?

Michal Dworczyk, the head of the Polish prime minister's office, described it as a further stage in Belarusian President Alexander Lukashenko's "war of disinformation." The Belarusian attorney general also agrees that there is a propaganda war taking place. But Schwed says it is being waged by states "who participated in the mass destruction of Belarusians and others during the Great Patriotic War and in the post-war era" and who were aiming to "distort historical events." In addition, he said these countries were attempting to destabilize the rule of law in Belarus and were resorting to "radicalism and various forms of extremism" to that end.

Historians on both sides of the border think that the idea that the Polish underground army could have also acted as an accomplice to Adolf Hitler is way off the mark. Belarusian historian Ihar Melnikau, for example, told Rzeczpospolita that the AK was answerable to the Polish government in exile in London and part of the anti-Nazi coalition. "You might accuse it of nationalism and fighting for a Poland within the borders of 1939, but it was on no account a fascist organization," he said.

Polish fellow historian Janusz Marszalec called Minsk's Nazi comparisons "downright absurd." "I don't think that anyone in the world will believe that the Polish Home Army worked hand-in-hand with the Germans to terrorize the country and carry out any kind of 'pacification' operations."

There are, admittedly, a few records of atrocities being carried out by AK members. Marszalec said that historians had, however, not shied away from examining them, citing murders of Jewish citizens and an "act of retaliation" carried out by a "Vilnius brigade" of the Home Army in Lithuania. But the Polish historian was insistent that these were isolated incidents. He said that he was not aware of any involving Belarus and that there was widespread consensus among historians that the AK was generally to be judged in a positive light.

"The Home Army was not saintly and, of course, its soldiers committed deeds during the Second World War that could be described as war crimes," according to Belarusian historian Alexander Pashkevich. "If you wanted to, you could find a lot of evidence that innocent people died because of them and that people with weapons, in general, committed all kinds of atrocities. But we know how brutal this war on our territory was and we can say with certainty that both sides were guilty of such acts. But it is a great exaggeration to say that the Home Army carried out genocide against the Belarusians as part of a deliberate agenda," he said.

The Belarusians have mixed feelings about the Home Army. The politics of memory cultivated by the Soviet system, Pashkevich said, was designed to paint a negative image of the AK because it was regarded as an ideological enemy. Not much has changed in this regard in independent Belarus, he added.

Pashkevich says Minsk's current interest in the story is a result of the current political situation. It is not a topic that is of concern to Belarusian society itself, according to the historian. However, it is a focus of interest in state media. For example, the Grodnenskaya Prawda newspaper has published a series of reports about the "true motives of the Polish Home Army." There have also been reports and programs on the topic on state TV.

Belarusian political scientist Valeri Karbalevich also finds it "evident that this entire campaign about the struggle against National Socialism is politically motivated and that history is merely being instrumentalized to achieve political goals." He said that the powers-that-be in Minsk were only trying to discredit today's opponents as neo-Nazis using events that had taken place 80 years earlier and that it was highly unlikely that AK perpetrators would be identified and brought to trial. "None of those who fought directly in the war are likely to be alive, and any remaining survivors took part in the Polish resistance in the post-war era when the Home Army no longer officially existed," explained Karbalevich.

What has played into the hands of Lukashenko and his propaganda machinery is the fact that under Poland's Law and Justice Party (PiS), a cult has grown up around the anti-communist underground of the post-war era. It focuses on people like Romuald Rajs, nicknamed "Bury." The controversial resistance fighter and AK member was also the leader of a paramilitary unit and is accused of being responsible for the murder of dozens of members of the Orthodox minority in Belarus.

The PiS has honored Rajs since taking power, and the Institute of National Remembrance (IPN), the country's state-run historical research institute, has called into question the accusations leveled against him. Nationalist groups regularly parade in commemoration of "Bury" through those villages in eastern Poland where people still remember his atrocities.

Yet the crimes that the former AK fighter is accused of took place in 1946. At that point, the AK had already been disbanded and some of its veterans, like "Bury," had radicalized as a result of the imposition of communist rule in Poland.