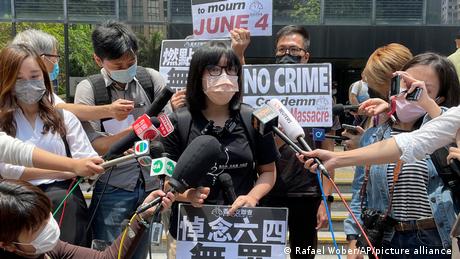 According to the reports and statements from fellow activists, Chow was arrested outside her office over an annual vigil to commemorate the victims of China's deadly Tiananmen Square crackdown.

Four police officers dressed in plainclothes said that she was being detained under section 17A of the Public Order Ordinance, which involves promoting unlawful assemblies, reported news agency AFP.

Why was Chow targeted?

Chow is the vice-chair of the Hong Kong Alliance in Support of Patriotic Democratic Movements of China, which operates the June 4 museum and organizes the annual vigil in the city's Victoria Park.

Hong Kong authorities has banned the vigil for the second year in a row and closed the museum earlier this week, citing the coronavirus pandemic.

While the alliance said they would not run the vigil this year, Chow — a prominent figure in the city's pro-democracy movement — had previously indicated that she would go to Victoria Park on Friday night in a personal capacity.

"As long as they haven’t said candles are illegal, we will light a candle," she said earlier this week. "It's a sign of whether we can defend our bottom line of morality ... That's the test."

"There will obviously be fear and people cannot just assume that they can come and express their remembrance for the Tiananmen massacre victims and be unscathed," she had said.

Chow added that she hopes for democracy in Hong Kong and China. "This is something worth fighting for. If one day we cannot talk about Tiananmen that would signify that Hong Kong is totally assimilated into Chinese society."

What is the June 4 anniversary?

For decades, thousands have gathered in Hong Kong to mark the anniversary of the 1989 crackdown in Beijing's Tiananmen Square where Chinese troops killed hundreds, by some estimates more than 1,000, of peaceful democracy protesters.

The city's Victoria Park was where one of the biggest candlelit vigils typically took place to remember those killed and to call on China to embrace democracy.

Authorities had denied permission for last year's vigil, also citing the pandemic at the time. But thousands defied the ban in a show of resistance to Beijing.

This year, many of the key figures who had been organizing the vigil for decades were sentenced to more than a year in jail for allegedly participating in an "unauthorized assembly" in 2019.