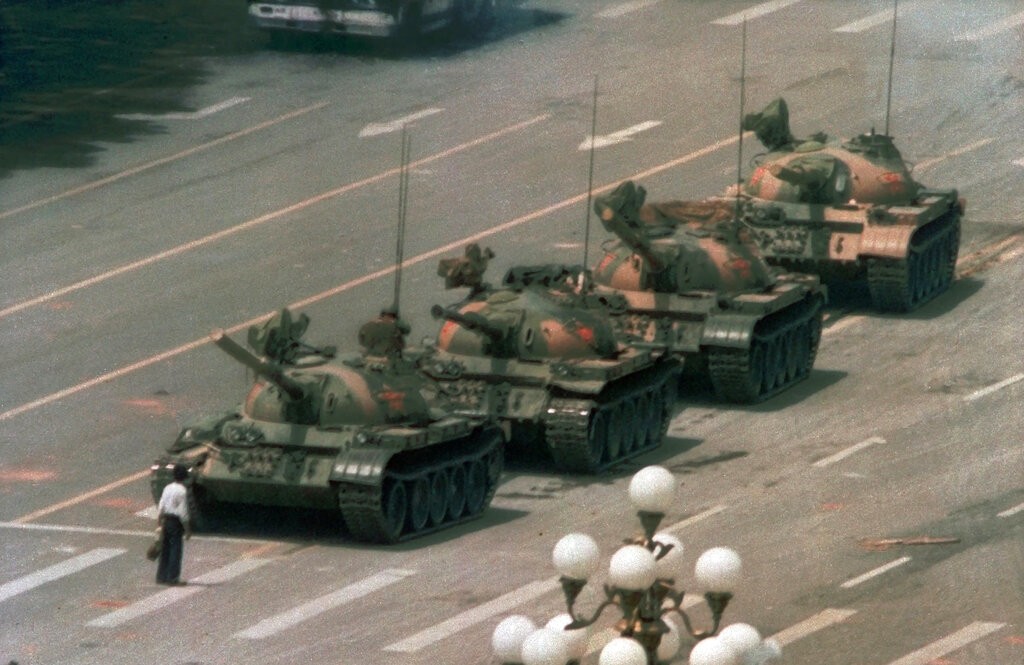 HONG KONG (Reuters) -Thousands of Hong Kong police are expected to patrol the city’s streets on Friday to prevent people from gathering to commemorate the 1989 crackdown by Chinese troops in and around Beijing’s Tiananmen Square.

Critics say the heightened vigilance from authorities is a marked departure from Hong Kong’s cherished freedoms of speech and assembly, bringing the global financial hub closer in line with mainland China’s strict controls on society.

The former British colony, promised a high degree of autonomy from Beijing upon its return to Chinese rule in 1997, has traditionally held the world’s largest vigil for the Tiananmen victims.

Police have banned the vigil for a second year in a row, citing the coronavirus. It did not say whether commemorating Tiananmen would breach a sweeping national security law China imposed in 2020 to set its most restive city onto an authoritarian path.

Late on Thursday, police urged people not to gather, saying in a statement it would “deploy sufficient police forces at relevant locations” ready to make arrests.

“It is a battle against oblivion,” exiled activist Sunny Cheung told Reuters by text.

“For so long, HK has been the only place where (we) can hold vigils to commemorate victims of the 6.4 and that defines HK as the only beacon of liberty and truth under the (Chinese Communisty Party’s) governance.”

City leader Carrie Lam has not commented on commemorations, saying only that citizens must respect the law, as well as the Communist Party, which this year celebrates its 100th anniversary. June 4 commemorations are banned in mainland China.

Last year, thousands in Hong Kong defied the ban, gathering in the downtown Victoria Park and lining up on sidewalks with lit candles across the city, in what was largely a solemn event, bar a brief scuffle with police in one district.

On Friday morning, there was no sign of police around Victoria Park. Public broadcaster RTHK, citing unnamed sources, reported 7,000 officers will conduct stop-and-search operations throughout the day.

Many plan to light candles again in their neighbourhood, if safe to do so. Some churches will be open for prayers.

Jailed activist Jimmy Sham said via his Facebook page he planned to “light a cigarette at 8pm.”

Prominent activist Joshua Wong was given a 10-month prison sentence last month after pleading guilty to participating in last year’s vigil, while three others got four to six month-sentences. Twenty more are due in court on June 11 on similar charges.

The Hong Kong Alliance in Support of Patriotic Democratic Movements of China, the organiser of the annual vigil, has said it would drop calls for people to show up at Victoria Park and not run an online commemoration as in 2020.

Its chairman Lee Cheuk-yan is in jail over an illegal assembly.

On Wednesday, Hong Kong’s June 4th Museum said it would temporarily close due to a probe into whether it had a public entertainment venue licence.

The gambling hub of Macau has also banned June 4 activities.

In democratically-ruled Taiwan, a memorial pavilion will be set up in Taipei’s Liberty Square, where people can lay down flowers while following social distancing rules. An LED installation of 64 lights will also be set up in the square.

Taiwan called on China on Thursday to return power to the people rather than avoid facing up to the crackdown. [L3N2NL0HX]

China has never provided a full account of the 1989 violence. The death toll given by officials days later was about 300, most of them soldiers, but rights groups and witnesses say thousands of people may have perished.