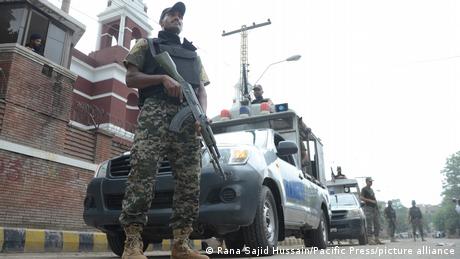 A Pakistani court dismissed blasphemy charges against a married Christian couple on Thursday, lifting the death sentence imposed by a lower court in 2014.

Shafqat Emmanuel Masih and his wife Shughufta Kausar Masih were accused of sending text messages to their Muslim colleagues in which they allegedly insulted Prophet Muhammad. The couple claims to be illiterate.

They also said they were trapped by Muslim colleagues due to a work-related dispute. The wife's colleagues apparently stole their identity documents and used them to buy cell phone numbers under the couple's names. The couple was jailed before the current practice of providers asking for an electronic thumb impression from their clients.

What was the EU stance?

The news of the acquittal follows a move by the European Parliament in April, when the EU lawmakers decried the "alarming" rise in blasphemy cases.

Commenting on the charges against the Christian couple, lawmakers said the evidence was "deeply flawed" and urged Pakistani authorities to lift the death sentence "immediately and unconditionally."

On Thursday, defense lawyer Saiful Malook said he expected the defendants to leave prison next week.

"I am very happy that we were able to get the release of this couple who are some of the most helpless people in our society," the attorney said.

Why is this case important?

Blasphemy charges are a serious issue in Muslim-majority Pakistan. In many areas of the country, even rumors of anti-Islamic behavior are enough to trigger violent attacks on minority groups. Prior to the couple's arrest, the husband, wife and their four children lived in the town of Gojra, west of Lahore. At least seven people were killed in Gojra in 2009, when a mob attacked a Christian neighborhood over rumors that a Koran had been desecrated.

The couple's attorney Malook is also known for representing Asia Bibi in a case parallel to the one against Shafqat Emmanuel Masih and Shughufta Kausar. Bibi was also sentenced to death, with her case capturing media attention in the West and the sentence eventually overturned. The acquittal triggered protests by religious extremists in 2018, with Bibi emigrating to Canada.

Some 80 people remain imprisoned on blasphemy charges in Pakistan, with half of them facing either the death penalty or life in prison, the Pakistani Dawn daily reported citing US Commission on International Religious Freedom.