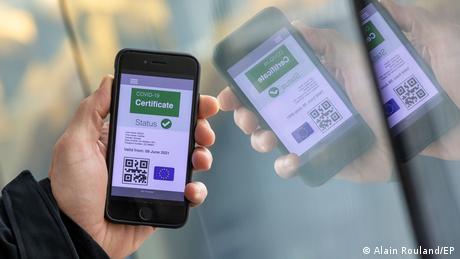 The European Commission on Thursday unveiled a plan to provide digital wallets for the EU’s 450 million residents to store their identity documents.

According to the proposal, EU citizens would be able to sign up voluntarily for the European Digital Identity Wallets, which would allow them access to a wide range of public services and store official documents.

What is the idea with the digital wallets?

Officials say the coronavirus pandemic has shown the need to have a way of recognizing paperwork across the 27-member bloc. Diplomats last month signed off on a digital green travel certificate, effectively a vaccine passport, as a means of reopening travel across the European Union.

The Commission, the EU executive body largely responsible for proposing legislation, intends for the wallets to come in the form of a smartphone application to help citizens navigate cross-border bureaucracy.

It could be used to open bank accounts, sign apartment leases and enroll in colleges abroad.

The digital wallet "will enable us to do in any member state as we do at home without any extra cost and fewer hurdles," said Margrethe Vestager, the European Commission’s executive vice president for digital. "And do this in a way that is secure and transparent."

Online platforms such as Google or Facebook would be required to accept the wallet, a provision that aligns with the commission’s goal of reining in big tech companies and their control of personal data.

Vestager said people would be able to use their EU digital wallets to access those services, instead of their "platform-specific" accounts.

"Because of that, you can decide how much data you want to share — only enough to identify yourself," she said from Brussels during a virtual media briefing.

Some EU countries already have their own national digital ID systems. Belgium has a mandatory ID card that has a mobile app equivalent that is used to pay taxes, carry out bank transfers or request key documents from local authorities.

The Commission plans to discuss the wallet with EU member countries and aims to get them to agree on technical details by the autumn so pilot projects can begin.

But before it becomes law, the proposal would be need to approved by lawmakers in the European Parliament and all 27 EU governments.