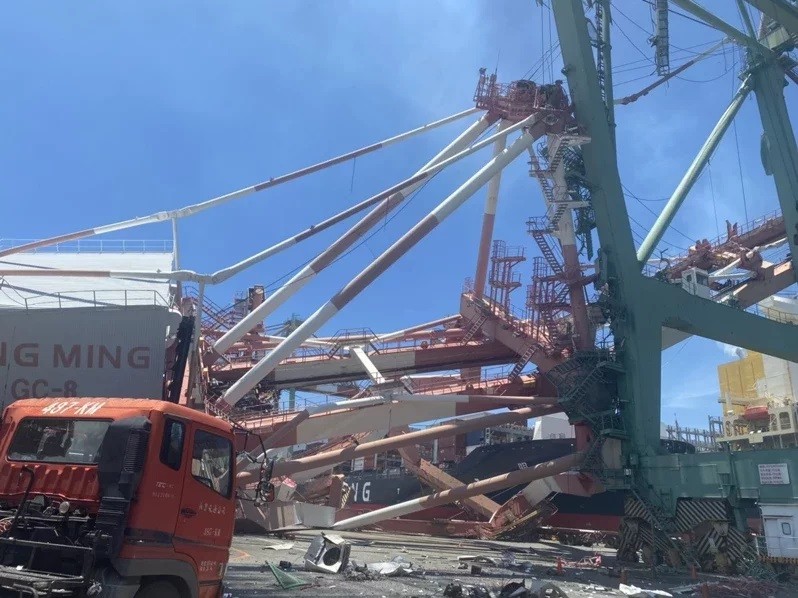 TAIPEI (Taiwan News) — Video surfaced on social media in Taiwan on Thursday (June 3) showing a massive container crane collapsing and workers running for their lives at the Port of Kaohsiung.

At 11 a.m. on Thursday, police received a report that a dockside gantry crane had collapsed at container yard Yang Ming Marine Transport Corp. at the Port of Kaohsiung's Pier 70, reported TVBS. Prior to the accident, the container ship Durban operated by Orient Overseas Container Line, commonly known as OOCL, was trying to make its way to Pier 66.

However, it veered off course and sideswiped the bow of YM Constancy (永明輪), which is operated by Yang Ming and was docked at Pier 70. As it continued to scrape against the YM Constancy, the Durban's bridge began to inexorably collide with the crane's boom as its pilot was unable to halt the hulking vessel's momentum. In a dramatic video of the incident, the massive container crane, GC8, can then be seen suffering a catastrophic structural failure as it collapses onto the dock and smashes into GC6. Containers are then sent tumbling like dominoes as debris rains down from above.

Dockworkers can be seen running for their lives to avoid being struck by the flying containers. Currently, one 58-year-old dock worker surnamed Chang (張) is reported to have suffered a laceration on his right arm, but he is conscious and has been sent to a hospital for examination and treatment. Rescuers were able to use a 60-meter mast-type jib crane to pluck the men from the wrecked crane by 12:44 p.m., reported UDN. According to witnesses at the scene, the men were traumatized by the accident but did not appear to be seriously injured.