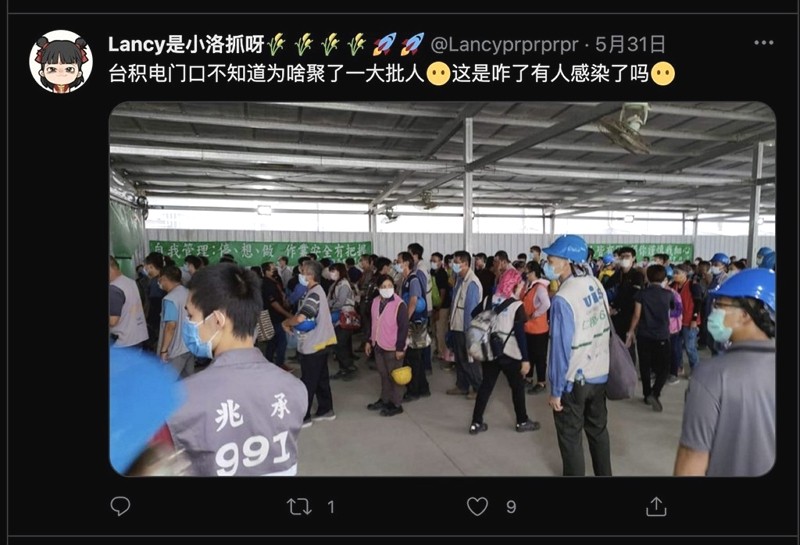 TAIPEI (Taiwan News) — Taiwan’s tech companies have become the latest targets of a relentless Chinese disinformation campaign as the country struggles to keep its COVID-19 outbreak in check.

The Investigation Bureau revealed on Tuesday (June 1) that Facebook and Twitter accounts with IPs based in foreign countries have been spreading rumors of cluster infections at tech firms in the Hsinchu Science Park. The science park is one of the country’s major tech hubs, housing the headquarters of several industry players, including Taiwan Semiconductor Manufacturing Company (TSMC).

One social media post written in simplified Chinese reads: “Why is there a large crowd outside TSMC? Did the workers get infected?” The Investigation Bureau believes it was produced by a Chinese netizen, judging from terms it used and the comments, wrote CNA.

A leading semiconductor foundry, TSMC accounts for 30 percent of the market-cap weighted TAIEX, and its showing has a great impact on the equity market. The company has reported sporadic COVID cases in Taiwan but says its operations are unaffected.

In addition, an actor posing as a Hsinchu-based corporate managers association has launched an online petition for vaccine procurement, exploiting this highly contentious topic that is gripping the country. The public is advised to exercise discretion when encountering news from dubious sources.

Taiwan has come under attack by the disinformation campaign as the country grapples with its worst-ever coronavirus outbreak. False stories such as “mass COVID cremations” and “doctored COVID data” have surfaced on social media.