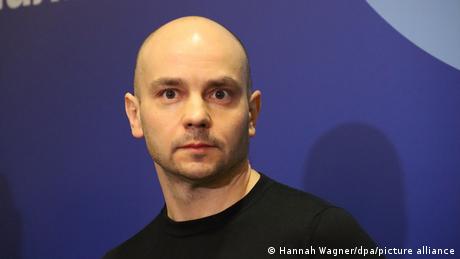 The scene that unfolded at St. Petersburg's Pulkovo Airport on Monday was strongly reminiscent of the recent detention of Belarusian blogger Roman Pratasevich. This time, the Russian opposition politician Andrei Pivovarov was the man who was led away. In Pivovarov's case, the aircraft was stopped just before takeoff rather than forced to make an emergency landing under a clearly fabricated pretext. Pivovarov was arrested just minutes before the plane was to lift off for Poland. "He was already seated in the aircraft," fellow activist Tatiana Usmanova told DW. "Then suddenly the plane was suddenly ordered to stop, and he saw a lot of police through the window."

Prosecutors accuse the 39-year-old opposition politician of working together with Open Russia, an organization linked to the former oil tycoon and Kremlin critic Mikhail Khodorkovsky. Pivovarov faces two to six years in prison.

Open Russia was originally set up by Khodorkovsky in 2001. After his arrest, it functioned as a movement and a loose association of regional NGOs, which worked in the areas of education, media and civil society. There are organizations registered under the same name in the UK where Khodorkovsky has lived since his release. In 2017, Moscow listed the UK-based group as "undesirable." The Russian umbrella organization tried to continue as a separate entity. Pivovarov was its director and he also led the regional St. Petersburg branch. Just a few days ago, he announced that he was dissolving the entire organization to avoid arrests. But he was clearly too late.

Pivovarov was taken from St. Petersburg to the southern Russian city of Krasnodar, where he faces trial. There is speculation about the reasons for his transfer. According to official sources, Pivovarov is accused of promoting an undesirable organization in August 2020. Usmanova suspects that he expressed support on Facebook and other platforms for a former coordinator of Open Russia, who had been convicted. Like her, Pivovarov was initially found guilty of a civil offense and fined twice. Now he, too, faces criminal charges.

Recently, Pivovarov appeared in YouTube and took part in protests calling for the release of opposition politician Alexei Navalny. His apartment was raided after his arrest.

Properties belonging to Dmitry Gudkov, an opposition politician and former member of parliament, and Alexander Solovyev, another former head of Open Russia, were also raided on Tuesday. Some observers in Russia say that this crackdown is intended to get rid of opposition politicians and activists. Just a few weeks ago, Moscow took steps to, in effect, break up Navalny's network, which is now crumbling under the pressure. This is all taking place against the backdrop of the Duma elections in mid-September. Recently, poll ratings for Putin's United Russia party sank to some 30 percent. Khodorkovsky remarked sarcastically on Twitter that Moscow's treatment of Pivovarov showed just how confident the ruling party were of winning.

Usmanova also sees a link to the upcoming elections. Pivovarov had been in talks with the liberal opposition Yabloko party about his possible candidacy. Gudkov had also signaled his interest. "The government has no desire for any independent candidates," Usmanova said. "They are being pressured to leave the country or arrested."

Later on Tuesday, offices belonging to Gudkov and Solovyev were searched. Gudkov was taken into custody.