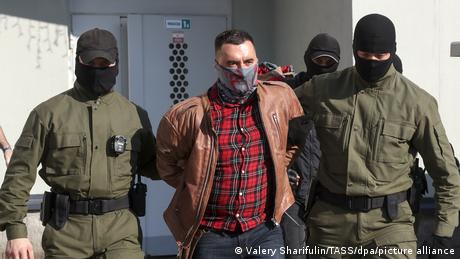 A Belarusian activist on Tuesday reportedly stabbed himself in the neck during a court appearance in the capital, Minsk.

The dramatic courtroom scene comes as the government of Belarus faces increasing pressure over the harsh crackdown on anti-government demonstrations that erupted last year.

A video appeared to show Stsiapan Latypau, named as well in media reports as Stepan Latypov under a different spelling, collapsing after using what looked like a pen as a weapon as he appeared before judges on charges of resisting arrest and staging actions that violate public order.

The 41-year-old is currently being treated in hospital. The Belarusian Health Ministry said that he is conscious and in "stable condition."

Viasna, an independent rights group monitoring the trial of Latypau, said it believed the activist harmed himself due to pressure he underwent in detention.

The dramatic scene came after Latypau's father appeared as a witness in court.

Following the questioning, Latypau addressed his father — saying that investigators threatened to open cases against his relatives if he did not admit his guilt, according to Viasna.

He then stabbed himself in the neck with an object that appeared to be a pen.

"Stsiapan turned blue and lay down on the bench, an ambulance was called," Viasna reported.

Why was he on trial?

Tuesday marked the start of Latypau's trial. He faces several charges — including resisting law enforcement that could amount to up to 10 years in prison.

Viasna and other rights groups declared him a political prisoner and have been monitoring the legal proceedings against him.

Some 35,000 people — including protesters, opposition figures and journalists — have been arrested by security forces in Belarus in a crackdown on the demonstrations.

Those in detention describe brutal conditions. DW reporter Alexander Burakov was released on Tuesday after spending 20 days in detention in Belarus. He described the treatment as "cruel and violent."

Lukashenko's government has come under increasing pressure following the forced diversion of a Ryanair passenger plane in late May and the arrest of dissident blogger Raman Pratasevich.

If you are suffering from serious emotional strain or suicidal thoughts, do not hesitate to seek professional help. You can find information on where to find such help, no matter where you live in the world, at this website:
https://www.befrienders.org/