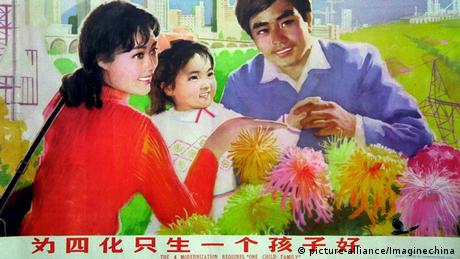 Want to understand why families in the world's most populous country are so reluctant to have children? Here's the simple answer: What married couple will feel like caring for four elderly people and three children at the same time under one roof amid all the career pressures they are under?

Those people who could now have progeny are almost exclusively only children, products of the "one-child policy” China introduced in the late 1970s to curb its rapid population growth. But these only children are now stuck in a sandwich position in the demographic pyramid: Not only do they have to provide for or even care for parents and in-laws, but they also have to raise their own children.

First one, then two, now three!

As in many other countries around the world, that pyramid is also upside down in China. In recent years, politicians have been trying to counter this aging society with small measures. However, only in 2016 did Beijing ease its strict one-child policy, after almost 40 years. Since then, families have been allowed to have two children.

But the hoped-for baby boom failed. Now, three children are not just allowed but even desired.

However, the birth rate has so far failed to increase because of one factor: money. Making a child is free, but after that it becomes expensive. It starts with paying for healthy baby food after the series of milk powder scandals that destroyed the confidence of young parents. Then there is the problem of having a room for each child in cities with expensive rents and property prices — and ideally, those rooms should be located in districts with good schools. Then there are all the music lessons and private tutoring, not to mention vacations at the beach.

China is currently pouring money into optimizing its social security system, which is supposed to relieve families of the burden of providing for the old and the young. In many cases, however, government schemes have only a limited effect, and families ultimately have to step in after all. Net contributors are thus under a double strain. As of now, they are supposed to keep paying into the social security system as always while at the same time bringing up more children.

In contrast to the traditional Confucian family image, in which several generations live under one roof, the self-confident middle class in the new China is characterized by an ever-more individualistic mindset. It wants more freedoms and more free time. But as we all know, yearslong parental obligations, in any societal model, are the biggest obstacle to personal self-realization of this kind.

China's politicians for family affairs now want to combat the lack of children with a package of measures: tax benefits for families, better maternity protection measures at work, regulations to stop parental leave being harmful to career chances and equal educational opportunities for children in cities and in the countryside. All of this aims to make China more child-friendly and fit for the future.

The Politburo has remained vague about how this package will be financed, saying only that it will be implemented at the municipal level. But municipalities are already heavily in debt. The whole thing looks rather like an attempt to square the circle. The Politburo is once again indulging in symbolic politics. At any rate, it will not have any effect on what happens in beds in the People's Republic.

DW journalist Dang Yuan writes under a pseudonym to protect himself and his family.