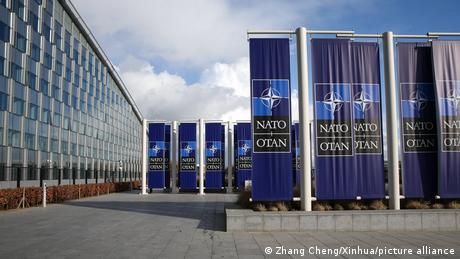 The NATO allies' defense and foreign ministers are meeting on Tuesday to prepare for the June 14 summit, which US President Joe Biden will attend.

On the ministers' agenda are the latest developments in Ukraine and Belarus as well as NATO's future ties with Russia.

The ministers are also expected to discuss the alliance's role in Afghanistan as it withdraws NATO troops.

The way forward in Afghanistan

As NATO withdraws troops from Afghanistan after two decades, allies have been considering the future of their ties with Kabul.

The UK announced that it would accelerate the relocation of its Afghan staff who worked with the military, often as interpreters, ahead of the planned withdrawal. Germany had also made a similar announcement.

Biden had said that the US would pull out its troops from Afghanistan by September 11. NATO troops are expected to leave by that date if they have not already.

Critics have raised concerns over the decision, fearing it could lead to the Taliban taking over the more urban parts of the country which it does not control.

Stoltenberg announced on Monday that the alliance would restrict access to its headquarters in Brussels for Belarusian officials.

Stoltenberg's announcement came in the wake of the forced Ryanair flight diversion that sparked international outrage.

In a joint statement last week, NATO's 30 member states condemned Belarus' move and called for the immediate release of Raman Protasevich and Sofia Sapega, who were arrested aboard the Ryanair flight.

"We have also clearly stated that we welcome the decision by many NATO allies to impose sanctions, including restricting the access of the Belarussian airliner to their airspace," Stoltenberg said.

Russia is high on the June summit agenda as relations between NATO allies and Moscow have hit a new low.

The Kremlin announced Monday that Russia would deploy an additional 20 military units in the country's western border areas by the end of the year.

"What we see is a pattern of Russian behavior where Russia over the last years has invested heavily in new modern military capabilities from conventional to nuclear weapon systems," Stoltenberg told reporters on Monday.

"Not only that but that Russia has been willing to use military force against neighbors in Georgia and Ukraine, continuing to destabilize Donbas and eastern Ukraine and illegally annexing Crimea."

NATO allies repeatedly raised concerns over tensions between Russia and Ukraine. The Kremlin had recently ordered troops back from the border with Ukraine, after a military buildup.

"Our message remains clear: We are prepared for dialogue, and we have made proposals, but the key to a better relationship lies clearly with Moscow," German Foreign Minister Heiko Maas told reporters ahead of Tuesday's meeting.

Meanwhile, Ukraine's president enthusiastically picked up on a suggestion from a leading German Green politician made recently during a visit to Kyiv. Green party co-chair Robert Habeck had suggested that Germany could sell military equipment to Ukraine.

"Germany has not given us any military aid, but it could do that," Ukraine's President Volodymyr Zelenskyy told the Frankfurter Allgemeine Zeitung newspaper's Tuesday edition. "Habeck understood that."

Habeck, who had called for supplying Ukraine with "defensive weapons," later clarified that he had meant "night vision devices, reconnaissance devices, ordinance disposal" and vehicles for medical evacuation.

Maas however, said he was convinced that the conflict in eastern Ukraine could only be resolved politically.

Biden, who will be attending his first NATO summit as president, will also meet Russia's President Vladimir Putin two days after in Geneva.

Russia's deputy foreign minister, Sergei Ryabkov, said the US should expect an array of "uncomfortable" signals in the coming days and ahead of the anticipated first meeting between the two leaders.

US relations with NATO were strained under Biden's predecessor, Donald Trump, with Biden making clear before and after his election that he intended to change this.