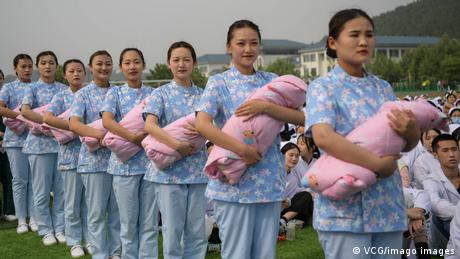 China has been trying to come up with effective measures to deal with its looming demographic crisis over the past few years. The government's latest measure is allowing married couples to have three children.

The move further loosens Beijing's tight control over Chinese citizens' reproductive rights over the last few decades. Some experts think the policy alone will have limited impact on the trend of China's fertility rate.

Stuart Gietel-Basten, a professor of social science and public policy at the Hong Kong University of Science and Technology (HKUST), told DW that some of his survey data suggested that only a small number of people in China really want to have a third child.

He said factors such as the costs of bringing up children and opportunity costs for working women's careers might discourage many Chinese women from thinking about having more children. "We wouldn't expect the policy change to make a major difference to the overall pattern of fertility in China," he said.

The measure didn't help to boost the fertility rate in the country significantly. Recent data shows that China's fertility rate in 2020 was 1.3 children per woman, making it on par with other aging societies like Japan and Italy.

'I just want to lie down'

Some women in China view the three-child policy as a remedy that goes in a different direction from their own family planning blueprint.

Brenda Liao, a 25-year-old student, told DW that many Chinese women around her age are now practicing a new lifestyle called "lie down" in China. It refers to a philosophy that encourages women and men in China to exert the bare minimum effort to fulfill duties or things in life.

"It doesn't matter what the government's family planning policy is, because I'm already committed to fulfilling the spirit of 'lying down' by not imposing any expectation regarding having children on myself," Liao said. "Many of my friends also share the same philosophy in life."

Other women highlighted the high cost of raising children in major cities in China as another reason why they won't consider complying with the government's three-child policy. "I live in a tier-one city in China, so the costs to raise children make me very anxious," said Lily Bi, a university professor. "I don't think I have the ability to cope with the anxiety that comes with raising a child properly while handling other pressures from society."

There are also some who think the Chinese government is now getting a taste of its own medicine after enforcing strict family planning policies for decades. "The government fined women for having more than one child for three decades and now they are urgently revising the policies due to the looming demographic crisis," said Amber Chen, a housewife in China. "They are paying the price for their own arbitrary policies. They should have known that women's reproductive rights are a basic human right and they shouldn't have taken it away from us."

In fact, a poll run by the state-run Xinhua news agency on the microblogging platform Weibo also supports the thoughts shared by many Chinese women. The poll asked respondents whether they were ready for the three-child policy and more than 28,000 out of 31,000 respondents said they would never consider it. The poll was later removed from Weibo.

A 'civil war' between Beijing and Chinese people

To other experts, while Beijing has further relaxed its tight control over family planning policies through the three-child policy, they think the essence of the law remains somewhat intrusive to Chinese citizens' basic rights. "The three-child policy is still a kind of family planning, population control and taking population as a burden," Yi Fuxian, a scientist at the University of Wisconsin-Madison in the United States, told DW.

"Family planning is a half-century-long civil war between the Chinese government and the Chinese people. To end this civil war, a change of direction in population policy needs to be completed by a decision of the National Congress of the Communist Party of China, the National People's Congress," he said.

"Perhaps this time it was too late, so the Chinese authorities first announced the three-child policy as an expedient policy at a Politburo meeting," he added.

Gietel-Basten from HKUST is of the view that apart from the three-child policy, the Chinese government also needs to roll out concrete measures that can "fix the problem from the supply end."

"China's demographic challenges won't be fixed by increasing the number of babies women can have," Gietel-Basten said. "If the Chinese government wants to increase the fertility rate, they need to do that by supporting people to reach their reproductive aspirations."

In addition to the three-child policy, the government is also planning to introduce a series of supportive measures in the hope that they would fundamentally improve China's population structure. The government plans to lower educational costs for families, increase financial and housing support, as well as safeguard the legal rights of working women.

Despite the criticism of the three-child policy, Gietel-Basten said it could still generate some positive changes to improve certain situations that Chinese women have to face. "The policy removes a clear inconsistency in the narrative surrounding the concerns over low fertility," he said.

"The change will make a major difference for the people who do wish to have a third child," he added. "It will also be an important step in further stamping out illegal actions on women's bodies, including sterilization and abortion sanctioned by some local officials."