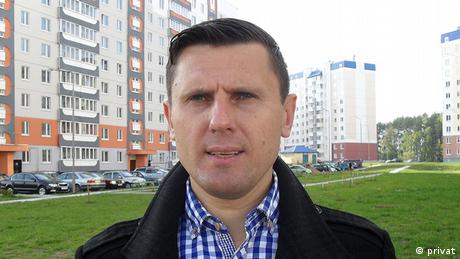 Freelance journalist Alexander Burakov, who regularly reports for DW from Belarus, was released on Tuesday after spending 20 days in detention. Speaking to DW after his release, Burakov compared the detention facility where he had been held to a "military prison."

The journalist said that police guards in the detention facility didn’t let him sleep properly during his time in detention and conducted nightly checks, which involved him getting completely naked.

"They were waking me up twice a night every night, taking me out of my cell and telling me to take my clothes off, including underwear," Burakov said. Similar checks also took place during the day. Burakov counted a total of 63 checks during his detention. He was also moved to a different cell every day, having to share a double cell with three other detainees for a few days.

Burakov also complained that police guards hadn’t provided him with a pillow, a blanket or bed linen. "No pillow is the worst," he recalled, adding that he had to sleep on an empty plastic bottle for 20 days instead. The police guards also didn't provide warm clothes or most of the food and personal belongings his relatives had brought him. When he demanded that the guards follow the internal rules of the detention facility, they used force against him by twisting his arm.

The journalist started a hunger strike in detention as an act of protest but had to end it after seven days due to health problems.

“I am very relieved that our colleague has withstood the unlawful detention more or less unscathed. But there are growing concerns that the spiral of state violence against journalists keeps turning,” DW’s Director General Peter Limbourg said in a statement. He noted that it is becoming more likely that the regime in Belarus will “hush the last independent voices in the country, no matter by what means.”

In May, Limbourg strongly condemned Burakov’s arrest and demanded that Belarusian authorities overturn the sentence. “It is not a good sign that the Belarusian ambassador in Berlin or the authorities in Minsk didn’t react to our protests against the arrest and conviction of Alexander Burakov,” he said in a statement issued Tuesday.

Media in Belarus increasingly under pressure

Burakov was arrested near a regional court in his home town of Mogilev, 200 kilometers (120 miles) east of Belarus' capital, Minsk, on May 12, while on an editorial assignment for DW’s Russian-language service. He was supposed to report on a trial against the opposition politician Pavel Seviarynets, who was accused of "participating in mass riots."

Three days after his arrest, Burakov was sentenced to 20 days in a detention facility on the charges of "repeatedly participating in an unsanctioned demonstration within a year." Burakov and human rights activists said no mass demonstration took place in front of the court in Mogilev that day.

This is already Burakov's third arrest over the last year. In 2020, he was sentenced twice to 10 days in temporary detention. He was also fined for his reporting for DW’s Russian-language service in 2014.

The head of the Europe and Central Asia division at Human Rights Watch in Berlin, Hugh Williamson, said he was not surprised by Burakov’s claims about the conditions in detention. "We've documented cases where journalists were brutally beaten while in detention. They were denied medical assistance and held in extremely poor conditions; their equipment was confiscated and destroyed," Williamson told DW.

He reminded that many journalists “had to either go underground or flee the country" amid a severe clampdown on media in Belarus.

The repression of journalists in Belarus has intensified since the presidential elections in August last year. Many journalists have been fined or imprisoned. In the most recent example of such repression, Belarus authorities ordered the country's largest independent media outlet, Tut.by, to shut down. Its chief editor, Marina Zolotova, was arrested on accusations of tax evasion and faces up to seven years in prison.